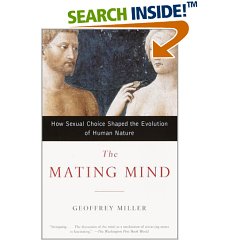 Here is installment #8 of my blogging "live" from the Internaltional Society for Intelligence Research (ISIR) 2005 conference in Albuquerque, NM.

Yes...more evolutionary psychology stuff and intelligence. That is the theme of all papers today. More practical papers come the next two days. Stay tunned. Remember, I'm more-or-less just regurgitating what is presented...not endorsing it.....this (evolutionary psychology) is NOT my area of expertise.

Miller. Mutual mate choice for intelligence as a fitness indicator.

I had a hard time focusing after lunch, so my comments for this paper are more haphazard and ADHD-driven.

The three major models advanced to explain the evolution of human intelligence:
Miscenallenous tidbits:
The presentor has devloped an algorithm (go figure) called the "fitness matching model." Not enough time/space here to describe. If you want more information, check out his book. Also check out some independent comments on his work.