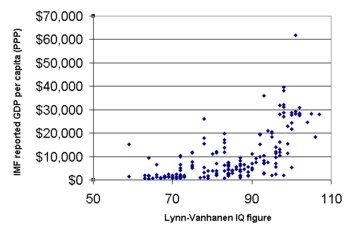 Here is installment #3 of blogging "live" from the Internaltional Society for Intelligence Research (ISIR) 2005 conference in Albuquerque, NM.

National IQ. Hmmmmmmm....not something I've read much about, nor, much that I think has practical implications (unless you are considering moving to a new country). However, "the relation between human talent and national indicators of economic and social well being has become a topic of interest not only to psychologists, but to economists and political commentators as well" (from Hunt and Wittman paper abstract).

Apparently, a controversial 2002 Lynn and Vanhanen book has created quite the stir. They reported strong (curvilinear?) correlations (.60+ range?) between Gross Domestic Production per Capita (GDP/C) and estimates of national intelligence, as indicated by conventional intelligence tests (IQ).

Hunt and Wittman presented "further analyses relating the Lynn and Vanhanen estimates to estimates of student scholastic achievement, on a nationwide basis, using the PISA data base, in which the same material is presented to large national samples of 15 year old students."

According to Hunt and Wittman, the Lynn and Vanhanen study had significant limitations...but is seminal for being the first major study of this topic. I didn't track all the current presentors conclusions---except, that more and better studies are needed.