[Note:  This is a working draft of a larger paper (Implications of 20 years of CHC Cognitive-Achievement Research:  Back-to-the-future and Beyond CHC) that will be presented at the first Inaugural Session of the Richard Woodcock Institute for Advancement of Contemporary Cognitive Assessment at Tufts University (Sept, 29, 2012):  The Evolution of CHC Theory and Cognitive Assessment).]   Working knowledge of the WJ III test batery will make this brief easier to understand, but is not necessary. 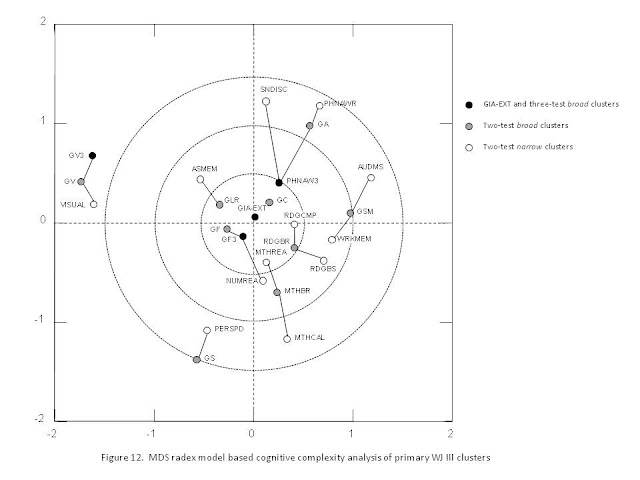 Implications for Test Battery Design and Assessment Strategies
The recognition of cognitive complexity as an important ITD principle suggests that the push to feature broad CHC clusters in contemporary test batteries, or in the construction of cross-battery assessments, fails to recognize the importance of cognitive complexity.  I plead guilty to contributing to this focus via my role in the design of the WJ III which focused extensively on broad CHC domain construct representation—most WJ III narrow CHC clusters require the use of the third WJ III cognitive book (the Diagnostic Supplement; Woodcock, McGrew, Mather & Schrank, 2003).  Similarly, guilty as charged in the dominance of broad CHC factor representation in the development of the original cross-battery assessment principles (Flanagan & McGrew, 1997; McGrew & Flanagan, 1998).
It is also my conclusion that the narrow is better conclusion of McGrew and Wendling (2010) may need modification.   Revisiting the McGrew and Wendling (2010) results suggest that the narrow CHC clusters that were more predictive of academic achievement likely may have been so not necessarily because they are narrow, but because they are more cognitively complex.  I offer the hypothesis that a more correct principle is that “cognitively complex measures” are better.   I welcome new research focused on testing this principle.
In retrospect, given the universe of WJ III clusters, a broad+narrow hybrid approach to intelligence battery configuration (or cross-battery assessment) may be more appropriate.  Based exclusively on the results presented in Figure 12, the following clusters would appear those that might better be featured in the “front end” of the WJ III or a selective testing constructed assessment—those clusters that examiners should consider first within each CHC broad domain:  Fluid Reasoning (Gf)[4], Comprehension-Knowledge (Gc), Long-term Retrieval (Glr), Working Memory (Gsm-MW), Phonemic Awareness 3 (Ga-PC), and Perceptual Speed (Gs-P).  No clear winner is apparent for Gv, although the narrow Visualization cluster is slightly more cognitively complex than the Gv and Gv3 clusters.  The above suggests that if broad clusters are desired for the domains of Gs, Gsm and Gv, then additional testing beyond the “front end” or featured tests and clusters would require administration of the necessary Gs (Decision Speed), Gsm (Memory for Words) and Gv (Picture Recognition) tests.

Utilization of the ITD test design principle of optimizing within-CHC cognitively complexity of clusters suggests that a different emphasis and configuration of WJ III tests might be more appropriate.  It is proposed that the above WJ III cluster complexity priority or feature model would likely allow practitioners to administer the best predictors of school achievement.  I further hypothesize that this cognitive complexity based broad+narrow test design principle most likely applies to other intelligence test batteries that have adhered to the primary focus on featuring tests that are the purest indicators of two or more narrow abilities within the provided broad CHC interpretation scheme.  Of course, this is an empirical question that begs research with other batteries.  More useful with be similar MDS Radex cognitive complexity analysis of cross-battery intelligence data sets.[5]

References (not included in this post.  The complete paper will be announced and made available for reading and download in the near future)


[1] This does not mean that cognitive complexity may not be related to the integrity of the human connectome or different brain networks. I am excited about contemporary brain network research (Bressler & Menon, 2010; Cole, Yarkoni, Repovs, Anticevic & Braver, 2012; Toga, Clark, Thompson, Shattuck, & Van Horn, 2012; van den Heuvel & Sporns, 2011), particularly that which has demonstrated links between neural network efficiency and working memory, controlled attention and clinical disorders such as ADHD (Brewer, Worunsky, Gray, Tang, Weber & Kober, 2011; Lutz, Slagter, Dunne, & Davidson, 2008; McVay & Kane, 2012). The Parietal-Frontal Integration (P-FIT) theory of intelligence is particularly intriguing as it has been linked to CHC psychometric measures (Colom, Haier, Head, Álvarez-Linera, Quiroga, Shih, & Jung, 2009; Deary, Penke, & Johnson, 2010; Haier, 2009; Jung & Haier, 2007) and could be linked to CHC cognitively-optimized psychometric measures.
[2] Only reading and math clusters were included to simplify the presentation of the results and the fact, as reported previously, that reading and writing measures typically do not differentiate well in multivariate analysis—and thus the Grw domain in CHC theory.
[3] GIA-Ext is also represented by a black circle.
[4] Although the WJ III Fluid Reasoning 3 cluster (Gf3) is slightly closer to the center of the figure, the difference from Fluid Reasoning (Gf) is not large and time efficiency would argue for the two-test Gf cluster.
[5] It is important to note that the cognitive complexity analysis and interpretation discussed here is specific to within the WJ III battery only. The degree of cognitive complexity in the WJ III cognitive clusters in comparison to composite scores from other intelligence batteries can only be ascertained by cross-battery MDS complexity analysis.