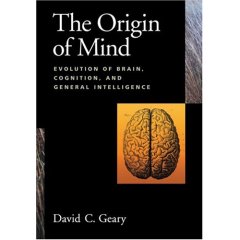 Installment #8 of blogging "live" from the Internaltional Society for Intelligence Research (ISIR) 2005 conference in Albuquerque, NM.

Geary. The Origin of Mind: Evolution of Brain, Cognition, and General Intelligence.

The gist of Geary's presentation is the explanation of human brain (intelligence) evolution via three classes of pressures. As summarized in much of the evolutionary psych literature are the classes of climactic and biological pressures. Beyond these, Geary focused primarily on social pressures....which are breifly summarized below. I think I'm going to put Geary's book on my holiday wish gift list.

Social pressures - Ecological dominance--that is, controlling the environments where the climactic and biological pressures operate. A struggle with other people for control of the ecologies. According to Geary, "the primary dynamic that has driven and is currently driving human evolution is competition with other people and groups of other people for resource control (e.g., of other people, food, and land)...social competition results in variability in social dynamics and through this creates pressures for the elaboration of systems of brain and mind that can anticipate, mentally represent, and devise behavioral strategies to cope with these complex social dynamics."

"These systems create self-centered mental models that enable the simulation of the ‘perfect world’, a world in which other people behave in ways consistent with one’s best interest, and biological and physical resources are under one’s control: These mental models enable people to devise behavioral strategies to cope with the actions of others and to better compete with others for social influence and resource control. The systems that evolved to support the use of mental models are known as general fluid intelligence (Gf), working memory (Gsm-MW), and attentional control (executive function) [Note....CHC info in parentheses added by me...the blogmaster]. The combination of these systems...is the foundation upon which human intellectual and cultural advances have been built.

According to Geary, our primate ancestors could not engage in the ability to imagine this "perfect world"....thus, explaining, in part, why the human brain incrementally evolved. Gf, working memory, and attentional control, which seem to be located primarily in the prefrontal cortex, are hypothesized to have allowed humans to do "future thinking", "mental simulations", "self-awareness", etc. For those who could do it well, this resulted in ecological dominance. These individuals had a better chance of survival and passing on their genes and in turn, the evolution of higher and higher Gf, working memory, etc.