Evidence for a unitary structure of spatial cognition beyond general intelligence

Performance in everyday spatial orientation tasks (e.g., map reading and navigation) has been considered functionally separate from performance on more abstract object-based spatial abilities (e.g., mental rotation and visualization). However, few studies have examined the link between spatial orientation and object-based spatial skills, and even fewer have done so including a wide range of spatial tests. To examine this issue and more generally to test the structure of spatial ability, we used a novel gamified battery to assess six tests of spatial orientation in a virtual environment and examined their association with ten object-based spatial tests, as well as their links to general cognitive ability (g). We further estimated the role of genetic and environmental factors in underlying variation and covariation in these spatial tests. Participants (N = 2660; aged 19–22) were part of the Twins Early Development Study. The six tests of spatial orientation clustered into a single ‘Navigation' factor that was 64% heritable. Examining the structure of spatial ability across all 16 tests, three, substantially correlated, factors emerged: Navigation, Object Manipulation, and Visualization. These, in turn, loaded strongly onto a general factor of Spatial Ability, which was highly heritable (84%). A large portion (45%) of this high heritability was independent of g. The results point towards the existence of a common genetic network that supports all spatial abilities.

Posted by Kevin McGrew at 8:16 PM No comments: 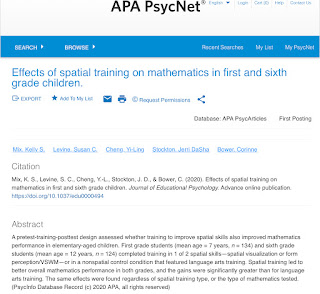 File under Gc and Gq as per CHC taxonomy 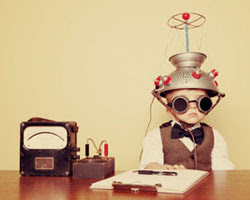 Difficulty in performing rhythmic tasks often co-occurs with literacy difficulties. Motivated by evidence showing that people can vary in their performance across different rhythmic tasks, we asked whether two rhythmic skills identified as distinct in school-age children and young adults would reveal similar or different relationships with two literacy skills known to be important for successful reading development. We addressed our question by focusing on 55 typically developing children (ages 5–8). Results show that drumming to a beat predicted the variability of rapid naming but not of phonological awareness, whereas tapping rhythmic patterns predicted phonological awareness, but not rapid naming. Our finding suggests that rhythmic interventions can be tailored to address PA and RAN deficits specifically in reading disabled children.

Posted by Kevin McGrew at 6:23 PM No comments:

Identifying meaningful cognitive and noncognitive predictors of mathematical competence is critical for developing targeted interventions for students struggling with mathematics. Here, 317 students' short-term verbal memory, verbal and visuospatial working memory, complex spatial abilities, intelligence, and mathematics attitudes and anxiety were assessed, and their teachers reported on their attentive behavior in 7th-grade mathematics classrooms. Bayesian regression models revealed that complex spatial abilities and in-class attention were the most plausible predictors of 7th-grade mathematics, but not word reading achievement, controlling for prior mathematics achievement. These results were confirmed with multilevel models that revealed interactions between these factors and prior achievement. The largest gains were among students with strong mathematical competencies in 6th grade, and average or better in-class attention in 7th grade as well as above average spatial abilities. High mathematics anxiety was associated with lower attention and through this indirectly influenced achievement gains. These results have implications for how to best target interventions for students at risk for long-term difficulties with mathematics. (PsycInfo Database Record (c) 2020 APA, all rights reserved)

Posted by Kevin McGrew at 6:20 PM No comments: