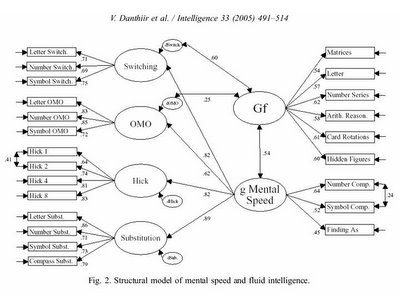 An interesting article in Intelligence regarding the possible higher-order structure of mental speed (Gs/Gt) and it’s relation to fluid intelligence (Gf). The contemporary structural research I recently reviewed regarding Gs and Gt provides for a slightly different conclusion (click here for a summary).

The strong reported Gs-to-Gf causal path continues to support the notion that cognitive processing speed, and possibly the larger domain of cognitive efficiency (Gs + Working memory), is important for higher-order thinking. See prior causal research summary that suggests the Gs-to-Gf relation may be more complex than simple Gs-to-Gf.