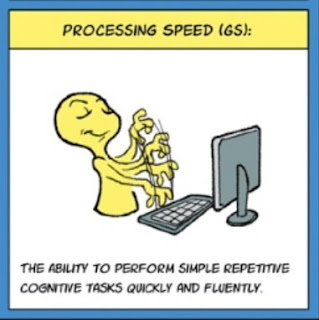 Processing Speed (Gs):   The ability to perform simple repetitive cognitive tasks quickly and fluently. This ability is of secondary importance (compared to Gf and Gc) when predicting performance during the learning phase of skill acquisition. However, it becomes an important predictor of skilled performance once people know how to do a task. That is, once people how to perform a task, they still differ in the speed and fluency with which they perform.  For example, two people may be equally accurate in their addition skills but one recalls math facts with ease and the other has to think about the answer for an extra half-second and sometimes counts on his or her fingers.