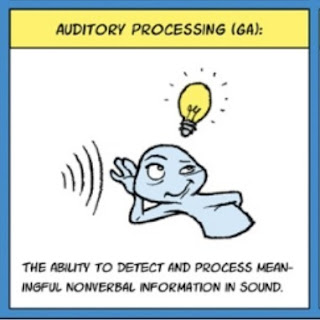 Auditory Processing (Ga):. The ability to detect and process meaningful nonverbal information in sound. This definition may cause confusion because we do not have a well developed vocabulary for talking about sound unless we are talking about speech sounds or music. Ga encompasses both of these domains but also much more. There are two common misperceptions about Ga. First, although Ga depends on sensory input, it is not sensory input itself. Ga is what the brain does with sensory information from the ear, sometimes long after a sound has been heard.. The second extremely common misconception is that Ga is oral language comprehension. It is true that one aspect of Ga (parsing speech sounds or Phonetic Coding) is related to oral language comprehension but this is simply a precursor to comprehension, not comprehension itself.