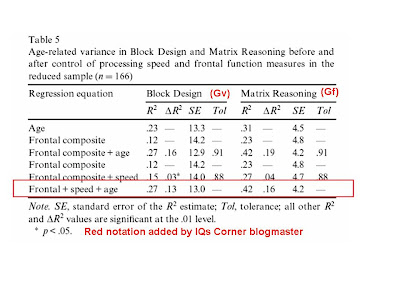 [Double click on table to enlarge for easier viewing]

What may be the reasons for decreased fluid intelligence (Gf) with increasing age?

According to recent study (see reference and abstract below),two of the primary causative factors for decreased fluid intelligence (as established by recent research) are (a) decreased speed of cognitive processing (a generalized cognitive slowing mechanism) and (b) decreases in the executive functions of the frontal lobes as evidenced by decreased frontal lobe volume, alterations in frontal lobel cell morphology, and reductions in cerebral blood flow to the frontal and prefrontal brain lobes. The current study investigated the relative contributions of processing speed and frontal lobe function on decreases in Gf. The abstract for the article (together with URL link) is reproduced below. I will summarize some of the major findings plus add my two cents.

I have 2 cents worth of methodological comments. First, measures of reaction time (Gt) operationally defined cognitive processing speed in this study. According to the CHC taxonomy, these measures represent aspects of the broad domain of Gt (broad reaction time), which is NOT to be confused with broad cognitive processing speed (Gs). Thus, the current results are specific to the influence of Gt and may not be generalizable to Gs abilities. Additional research with valid Gs markers is needed.

Second, the authors continue the unfortunate tradition of using the Wechsler Block Design test as a marker for Gf. Contemporary Gf-Gc/CHC joint exploratory and confirmatory factor studies have convincly indicated that Block Design is a strong measure of visual-spatial processing (Gv)...not Gf. Luckily, the authors also use the Wechsler Matrix Reasoning test which is a valid indicator of Gf. Given the problems with Block Design, I recommend that readers of this article only pay attention to the results focused on understanding the decline in the Matrix Reasoning test (Of course, the Block Design findings can be interpreted in the context of Gv if that is what is of interest.)

Given this caveat, below are the major conclusions regarding possible explanations for age-related declines in Gf. I believe readers should only focus on the composite Gt measure as the indicator of general reaction time (Gt) and only the analyses that included the Gt, frontal function measures, and age in the analysis (as these provide the most valid and comprehensive explanations from the current study). These findings have been highlighted in red in the above table picture.
Bugg, J., Zook, N., DeLosh, E., Davalos, D. & Hasker, D, (2006). Age differences in fluid intelligence: Contributions of general slowing and frontal decline. Brain and Cognition, 62, 9–16 (click here to view)