Lay people and many professionals often express consternation when an individuals measured IQ scores are different at different times in their life.  This concern is particularly heightened in high stakes settings where differences in IQ scores can result in changes in eligibility for programs (e.g., social security disability income) or life-or-death decisions (e.g., Atkins MR/ID death penalty cases).

Factors contributing to significant IQ score differences are many (McGrew, in press a) and may include: (a) procedural or test administration errors (e.g., scoring errors; improper nonstandardized test administration; malingering; age vs. grade norms; practice effects), (b) test norm or standardization differences (e.g., norm obsolescence or the Flynn Effect; McGrew, in press b), (c) content differences across different test batteries or between different editions of the same battery, or (d) variations in a person’s performance on different occasions.

An article "in press" (Neuroimage) by Burgaleta et al. (click here to view copy with annotated comments)  provides the important reminder that differences in IQ scores for an individual (across time) may be due to real changes in general intelligence related to real changes in brain development.  These researchers found that changes in cortical brain thickness were related to changes in IQ scores.  They concluded that "the dynamic nature of intelligence-brain relations...support the idea that changes in IQ across development can reflect meaningful general cognitive ability changes and have a neuroanatomical substrate" (viz., changes in cortical thickness in key brain regions).  The hypothesis was offered that changes in the the cortical areas of  frontoparietal brain network (see P-FIT model of intelligence) may be related to changes in working memory, which in turn has been strongly associated with general reasoning (fluid intelligence; Gf).

The cortical thickness-IQ change relation was deemed consistent with "cellular events that are sensitive to postnatal development and experience."  Possible causal factors suggested included insufficient education or social stimulation during sensitive developmental periods, as well as lifestyle, diet and nutrition, and genetic factors. 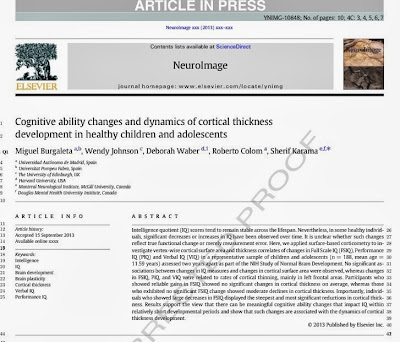 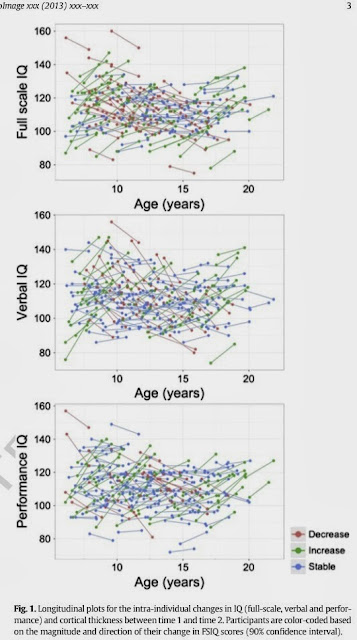 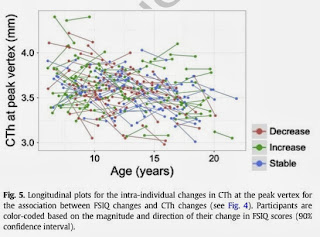