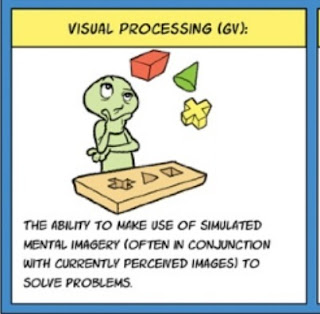 Visual Processing (Gv):  The ability to make use of simulated mental imagery (often in conjunction with currently perceived images) to solve problems. Once the eyes have transmitted visual information, the visual system of the brain automatically performs a large number of low-level computations (e.g., edge detection, light/dark perception, color-differentiation, motion-detection, and so forth). The results of these low-level computations are used by various higher-order processors to infer more complex aspects of the visual image (e.g., object recognition, constructing models of spatial configuration, motion prediction, and so forth).