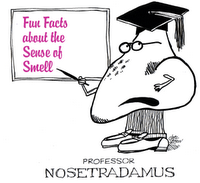 In my book chapter, CHC Theory: Past, Present, and Future (this is on-line version of a chapter published in Flanagan and Genshaft's 2005 CIA book) I alerted folks to the fact that the CHC taxonomy of cognitive abilities needed to be expanded to include tactile (Gh), kinesthetic (Gk), and olfactory abilities (Go) (click here). Many of my educational/school psychology colleagues have often asked me what possible relevance Go abilities would have for psychological assessment. To make a long story short, I have reminded my educationally-based friends and associates that cognitive assessments are used in many non-educational settings (e.g., aging research and clinical work; occupational settings; industrial settings; personnel selection settings, etc.).

In my 2005 chapter, I stated: "although largely ignored in structural investigations of human cognitive abilities, olfactory abilities (Go) are important to study given the use of the olfactory sense by blind or partially sighted people, and experts such as “gourmets, wine connoisseurs, coffee experts, and the like” (Danthiir, Roberts, Pallier, G. & Stankov, 2001, p. 357). In addition, recent clinical research has suggested that declines in olfactory abilities may be associated with a variety of clinical disorders and diseases ranging from Azheimer’s, idiopathic Parkinson’s, alcoholism and drug abuse, attention deficit/hyperactivity disorders, severe- stage anorexia nervosa, Down’s syndrome, head trauma, multiple sclerosis, restless leg syndrome, seasonal affective disorder, and others (see Doty, 2001, for a complete review)"

I have now run across two new empirical articles that continue to suggest that assessment and monitoring of Go abilities may be important for the possible early detection of eventual mental decline/disorders as well as helping us better understand the underlying neurological structural/functional mechanisms of certain mental/cognitive disorders. Both studies were published in the Journal of Experimental and Clinical Neuropsychology (2006, Vol 28). For those who want to be in the "nose", I've reproduced the references and abstracts below, along with links to the original articles. One articles deals with Go and schizophrenia while the other deals with Go and Huntingon's Disease

Moberg et al. (2006). Olfactory Functioning in Schizophrenia: Relationship to Clinical, Neuropsychological, and Volumetric MRI Measures
Finally, I ran a quick search of the IAP reference database and located the following additional references...for those who want to read more.