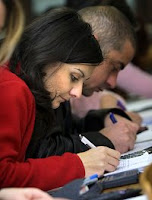 Damn!.......this is an exciting time us who are interested in the psychology of human intelligence. Psychometric research has largely converged on the Cattell-Horn-Carroll (CHC) theory of cognitive abilities (aka, Gf-Gc theory) as the most well-validated structure of human cognitive abilities. New and old intelligence batteries are being revised to fit the CHC model (KABC-II; Stanford-Binet V; WJ-R/WJ III). Within this context additional excitement has been building re: a number of long-standing group intelligence difference research controversies (racial differences; gender differences) that are enjoying a resurgence among individual difference researchers.

It is within this context that I just read the excellent "in press" article (journal of Intelligence) by my friend Dr. Tim "Happiness is a latent variable" Keith (and his band of top notch SEM'ers) that addresses gender differences in latent variable CHC cognitive abilities and general intelligence (g). A copy of the article can be viewed by clicking here. The abstract of the article is reproduced below.

As per usual, I'm extremely impressed with the methodological rigor of Tim's research. Not only does he present his sophisticated CHC SEM-based research with clarity and statistical elegance, he addresses potential methodological criticisms via additional post-hoc analysis...to help sort out why some of his findings are at variance with recent gender difference research by such heavy hitters as Richard Lynn (click here for his official web page).

I think this is a very important article for a number of reasons. First, it examines gender differences in cognitive abilities as per the CHC taxonomic framework. Second, Keith et al. focus on the analysis of latent CHC constructs and not constructs measured with imperfect manifest variable composite variables (this distinction is discussed in detail in the article). Third, Keith et al.'s research uses a battery of tests (WJ III battery) that were specifically designed as per the CHC theory and, John Horn and Jack Carroll both served as consultants on the WJ III [conflict of interest note - I'm a coauthor of the WJ III and thus have a financial interest in the instrument]. Finally, given the wide age-range of the WJ III battery, analysis was possible across almost the complete age-range of development with a common set of CHC-validated indicators.

The major findings are summarized in the abstract below. The finding that is likely to be most controversial is the that males and females did not differ in general intelligence (g) during childhood (consistent with most research), but that females displayed statistically significantly higher g at adulthood (18 years and above). This female g advantage is at variance with Richard Lynn's developmental hypothesis-based research that has suggested that males show statistically higher g at adulthood. My guess is that these divergent findings are going to enjoy some stimulating scholarly debates. Keith's discussion of the potential reasons for these divergent findings is, IMHO, very well thought out and buttressed by his secondary post-hoc analysis focused on potential methodological differences between the two sets of research.

Wouldn't it be great if Lynn and Keith could present and debate their respective findings at a future ISIR conference?

My only minor quibble with the article is that Keith et al. labeled their two-test combination of the WJ III Visual-Auditory Learning and Memory-for Names tests as a broad Glr latent factor (long-term storage and retrieval). As I've written many places over the past few years, and as espoused by CHC cross-battery research, these two tests are best viewed as slightly different indicators of the narrow Glr ability of Associative Memory (MA). Glr is broader than just MA. I would suggest that the Glr findings be more narrowly interpreted as providing information on gender differences in the narrow MA ability...and cannot be generalized (just yet) to the broad domain of Glr (click here for page that defines and lists the breadth of narrow abilities under Glr).