Interesting new study that provides some support for a possible tactile working memory (Gwm) ability in the CHC taxonomy. Much more research needed before one could consider adding it to CHC taxonomy. Click on image to enlarge. 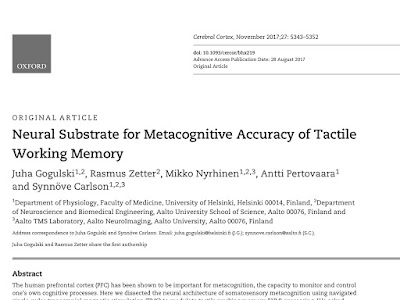 The human prefrontal cortex (PFC) has been shown to be important for metacognition, the capacity to monitor and control one's own cognitive processes. Here we dissected the neural architecture of somatosensory metacognition using navigated single-pulse transcranial magnetic stimulation (TMS) to modulate tactile working memory (WM) processing. We asked subjects to perform tactile WM tasks and to give a confidence rating for their performance after each trial. We circumvented the challenge of interindividual variability in functional brain anatomy by applying TMS to two PFC areas that, according to tractography, were neurally connected with the primary somatosensory cortex (S1): one area in the superior frontal gyrus (SFG), another in the middle frontal gyrus (MFG). These two PFC locations and a control cortical area were stimulated during both spatial and temporal tactile WM tasks. We found that tractography-guided TMS of the SFG area selectively enhanced metacognitive accuracy of tactile temporal, but not spatial WM. Stimulation of the MFG area that was also neurally connected with the S1 had no such effect on metacognitive accuracy of either the temporal or spatial tactile WM. Our findings provide causal evidence that the PFC contains distinct neuroanatomical substrates for introspective accuracy of tactile WM.

Below is a section (submitted draft copy) of our (Joel Schneider and I) forthcoming CHC update chapter. In Gh we currently did not see enough support for a tactile working memory factor, although we have speculated that such memory may exist (see italic font sections).

Gh refers not to sensitivity of touch, but to the cognition one performs with tactile sensations. Because this ability is not yet well defined and understood, it is hard to describe authoritatively. We speculate that it will include such things as tactile visualization (object identification via palpation), localization (where has one been touched), memory (remembering where one has been touched), texture knowledge (naming surfaces and fabrics by touch), and many others. Tests of Gh have long been used in neuropsychological batteries because of their ability to detect brain injury, especially to the somatosensory cortex. Attempts to developed haptic-based assessment batteries have also been developed for individuals who are blind or have severe visual disabilities (e.g., the Blind Learning Aptitude Test).

Much to the disdain of new parents, our initial explorations of the world as infants is filled with touching, grabbing, and sucking almost any object within immediate reach. The human sense of touch, be it with our hands or mouth, provides perceptual information regarding our immediate environment and serves as a primary foundation for the development of many concepts. The importance of touch permeates our discussion of learning as “we often talk about ‘grasping’ an idea, ‘getting a handle on’ a problem, or being ‘touched’ by a reading” (Minogue & Jones, 2006, p. 317). Driven by recent technological developments in robotics, 3D printers (making it possible to develop precise 3D stimuli), prosthetic limbs and hands, touch screen mobile devices and haptic feedback displays, technology to aid the visually impaired, the teleoperation of remote sensing or manipulation devices (telesurgery; operating remote drones), virtual reality based training and simulation (e.g., training of surgeons), etc., there has been increasing interest and research into tactile or haptic abilities (Kappers & Bergmann Tiest, 2013).

Circumscribing the emerging research on haptic perception is beyond the scope of this chapter. Haptic perceptual characteristics include such material properties as roughness, compliance, viscosity, friction, temperature, density and weight, and spatial properties, such as shape, curvature, length, volume and orientation, as well as quantitative properties such as numerosity (Kappers & Bergmann Tiest, 2013). A complete understanding of haptic perception requires understanding the peripheral sensory receptors (in the skin, muscles, tendons and joints), research that has identified two channels of haptic perception (“what” and “where”), and other issues such as vision-touch interactions, affective touch, and neural plasticity (Lederman & Klatzky, 2009). Furthermore, consumer psychologists have learned that some individuals have a “need for touch” (Peck & Childers, 2003) when evaluating products to counter common visual misperceptions (some scientists refer to touch as the “reality sense”; Nuszbaum, Voss, Klauer, & Betsch, 2010). The implications of touch for cognition are recognized by many educators who advocate the use of “hands-on” instruction (see Minogue & Jones, 2006, for emerging educational applications of haptic sensations).

Despite the recent increase and variety of haptic perception research and applications, the limited structural evidence research does not allow us to articulate a more nuanced version of the fundamental factors of haptic abilities than outlined in our 2012 chapter —there are yet no well-supported cognitive ability factors within Gh. Although Stankov, Seizova-Cajic and Roberts (2001) identified a narrow tactile sensitivity (TS) factor, this is a sensory ability (refers to the ability to make fine discriminations in haptic sensations) and not a cognitive ability. For example, if two caliper points are placed on the skin simultaneously, we perceive them as a single point if they are close together. Some people can make finer discriminations than others. The very narrow TS factor was found to be minimally related to higher-level broad CHC abilities (Gf, Gv, Ga; Stankov et al., 2001). Two new (or previously overlooked) Gh structural evidence studies summarized below were either inconclusive or are based on samples to small to suggest revisions to the Gh domain.

In a factor study of the tactile measures from the Dean-Woodcock Sensory Motor Battery and CHC measures with a conormed cognitive battery of measures representative of the Cattell-Horn-Carroll (CHC) model of intelligence, Decker (2010) found that the Palm Writing and Object Identification tests did not form a distinct Gh factor and either loaded on a processing speed (Gs) factor or were factorially complex (Gs and Gv). Ballesteros, Bardisa, Millar and Reales (2005) investigated the psychometric characteristics, including factor analysis, of a psychological test battery designed to measure the perceptual and cognitive abilities of children with visual handicaps. The 20-test battery materials consist of raised-dot, raised-surface shapes and displays, and familiar and novel 3-D objects that required active touch. In a small sample, exploratory factor analysis identified six factors—spatial comprehension, short-term memory, object identification, shape identification efficient exploration, material and texture discrimination. Given the small sample size and the lack of other CHC ability indicators, the Ballesteros et al. (2005) study can only be considered suggestive and a first step in the exploration of the structural nature of Gh.

Most practical and clinical applications of Gh tests actually use sensory acuity tests. There are currently no available tests of higher-order Gh processes that are clearly distinct from Gv or Gs. The Halstead-–Reitan Neuropsychological Test Battery and the Dean-Woodock–Woodcock Neuropsychological Battery include several Gh tests.

1. How is Gh to be distinguished from Gv and Gf? Two well-designed studies (Roberts, Stankov, Pallier, & Dolph, 1997; Stankov et al., 2001) found it difficult to distinguish between complex tests assumed to measure Gh and well-defined markers of Gv and Gf. Why might this be so? If the test involves identifying common objects (coins, keys, books, etc.) by handling them while blindfolded, the examinee is essentially using the hands instead of the eyes to visualize an object in the “minds eyes.”

2. What about “dynamic touch”? Do abilities from the Gh and kinesthetic (Gk) domains combine to reflect individual differences in dynamic touch (Stankov et al., 2001; Turvey, 1996)?

3. Like the presence of imagery in vision and auditory abilities, does some form of haptic imagery ability exist? What role would it play in Gh abilities?

- Posted using BlogPress from my iPad
Posted by Kevin McGrew at 9:51 AM