Research Byte: Is General Intelligence Little More Than the Speed of Higher-Order Processing?

Although a small sample, this is still and interesting study. The results are consistent with the continued nexus of the g, Gf, Gwm, attentional control and speed of higher order processing (especially P300 in ERP’s), white matter tract integrity and the PFIT model of intelligence as well as the recent process overlap theory (POT) of g. 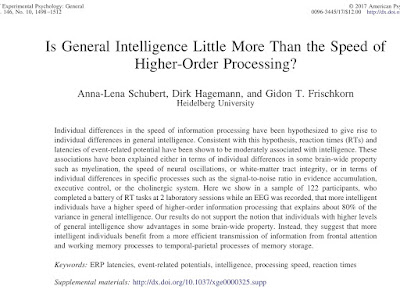 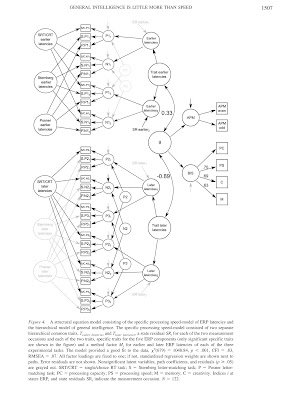 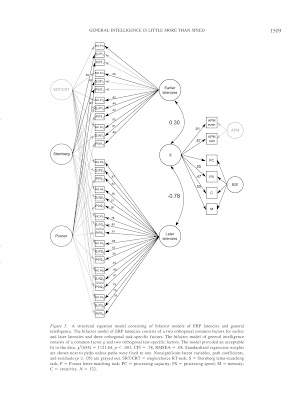 Individual differences in the speed of information processing have been hypothesized to give rise to individual differences in general intelligence. Consistent with this hypothesis, reaction times (RTs) and latencies of event-related potential have been shown to be moderately associated with intelligence. These associations have been explained either in terms of individual differences in some brain-wide property such as myelination, the speed of neural oscillations, or white-matter tract integrity, or in terms of individual differences in specific processes such as the signal-to-noise ratio in evidence accumulation, executive control, or the cholinergic system. Here we show in a sample of 122 participants, who completed a battery of RT tasks at 2 laboratory sessions while an EEG was recorded, that more intelligent individuals have a higher speed of higher-order information processing that explains about 80% of the variance in general intelligence. Our results do not support the notion that individuals with higher levels of general intelligence show advantages in some brain-wide property. Instead, they suggest that more intelligent individuals benefit from a more efficient transmission of information from frontal attention and working memory processes to temporal-parietal processes of memory storage.

- Posted using BlogPress from my iPad
Posted by Kevin McGrew at 8:15 PM