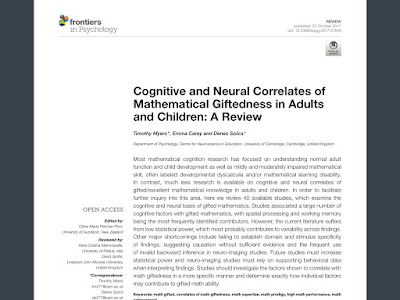 Most mathematical cognition research has focused on understanding normal adult function and child development as well as mildly and moderately impaired mathematical skill, often labeled developmental dyscalculia and/or mathematical learning disability. In contrast, much less research is available on cognitive and neural correlates of gifted/excellent mathematical knowledge in adults and children. In order to facilitate further inquiry into this area, here we review 40 available studies, which examine the cognitive and neural basis of gifted mathematics. Studies associated a large number of cognitive factors with gifted mathematics, with spatial processing and working memory being the most frequently identified contributors. However, the current literature suffers
from low statistical power, which most probably contributes to variability across findings. Other major shortcomings include failing to establish domain and stimulus specificity of findings, suggesting causation without sufficient evidence and the frequent use of invalid backward inference in neuro-imaging studies. Future studies must increase statistical power and neuro-imaging studies must rely on supporting behavioral data when interpreting findings. Studies should investigate the factors shown to correlate with math giftedness in a more specific manner and determine exactly how individual factors may contribute to gifted math ability.

In line with the heterogeneous nature of mathematical disabilities (e.g., Rubinsten and Henik, 2009; Fias et al., 2013), mathematical giftedness also seems to correlate with numerous factors—(see Appendix A for which factors were found in each study). These factors roughly fall into social, motivational, and cognitive domains. Specifically, in the social and motivational domains, motivation, high drive, and interest to learn mathematics, practice time, lack of involvement in social interpersonal, or religious issues, authoritarian attitudes, and high socio-economic status have all been related to high levels of mathematical achievement. Speculatively, it is interesting to ask whether some of these factors may be related to the so-called Spontaneous Focusing on Numerosity (SFON) concept which appears early in life and means that some children have a high tendency to pay attention to numerical information (Hannula and Lehtinen, 2005). To clarify this question, longitudinal studies could investigate whether high SFON at an early age is associated with high levels of mathematical expertise in later life. Better assessment of individual variability is also important, for example, Albert Einstein (who was a gifted even if sometimes “lazy” mathematician; see e.g., Isaacson, 2008) was famously anti-authoritarian.

In terms of cognitive variables, we found that spatial processing, working memory, motivation/practice time, reasoning, general IQ, speed of information processing, short-term memory, efficient switching from working memory to episodic memory, pattern recognition, inhibition, fluid intelligence, associative memory, and motor functions were all associated with mathematical giftedness. As a caveat it is important to point out that mere “significance counting” (i.e., just considering studies with statistical significant results regarding a concept) can be very misleading especially in the typically underpowered context of psychology and neuro-imaging research (see e.g., Szucs and Ioannidis, 2017). However, considering the patchy research, this is the best we can do at the moment. In addition, even if meta-analyses were possible, these also typically only take into account published research, so they usually (highly) overestimate effect sizes especially from small scale studies (see Szucs and Ioannidis, 2017).


- Posted using BlogPress from my iPad
Posted by Kevin McGrew at 11:18 AM