Number sense: Two dimensional construct that may either be Gf, Gq or mixed Gf/Gq in CHC taxonomy

Very interesting article on the structure of number sense (numerosity) and correlates of the dimensions of number sense. Joel Schneider and I, in our 2012 CHC book chapter, suggest that number sense is likely a new ability that needs to be included in the CHC taxonomy. At this time there is no research I am aware of that helps determine where number sense fits in the CHC taxonomy. As Joel and I have written, we believe it likely would fall under Gq or Gf. It is my current thinking, based on the study featured here and other research I have read, that number sense most likely is a factorially complex ability that will fall under Gq and Gf (RQ). There is likely going to be an increase in standardized measures of number sense (or numerosity) in future individually administered test batteries.
Click on images below to enlarge 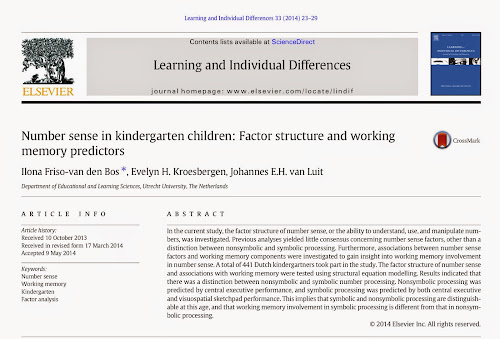 "NS at an early age has been denoted as the most important predictor of later mathematics performance: more important than general intelligence, and still present when controlling for other measures such as working memory (e.g., Geary, Hoard, Nugent, & Bailey, 2013; Mazzocco, Feigenson, & Halberda, 2011). Similarly, problems in early NS may precede long-lasting problems in mathematics performance throughout the academic career of a child (Ansari & Karmiloff-Smith, 2002; Butterworth, 2005). In the past decades, research concerning the components of NS, its predictive role for later performance, and the possibilities to remediate delays in NS has been expanded (e.g., Dyson, Jordan, & Glutting, 2013; Toll & Van Luit, 2013a). The present study builds on current understandings of NS and aims to inves-tigate the factor structure of NS and the predictive role of working memory (WM)."

"Although research concerning NS has recently increased, there is limited consensus with regard to its definition. Dehaene (1992, 2001) stressed the intuitive capacity to mentally represent quantities, but other definitions focus on declarative knowledge of numbers, and the ability to compare between and manipulate them, as evidenced by di-verse batteries of quantity-related tests (Jordan, Glutting, Ramineni, & Watkins, 2010; Malofeeva et al., 2004). Also, a limited number of studies have targeted the factors underlying the construct."

"The factor analysis yielded a factor structure of two distinct components. The first component can be characterised as symbolic processing and is primarily based on culture-based taught skills: number recognition, counting, and using number words in a meaningful context. This factor could predict performance on digit knowledge and counting, but also on the symbolic versions of the number comparison and number line test, as formal knowledge of number symbols and words was needed for successful completion of these tasks. The second factor could be characterised as nonsymbolic processing, and primarily indicated the intuitive processing of number and magnitude, quite similar to the influential definition of NS given by Dehaene (2001), who postu-lated that NS is quick and intuitive. This factor could predict performance on both the symbolic and the nonsymbolic comparison and number line tests." 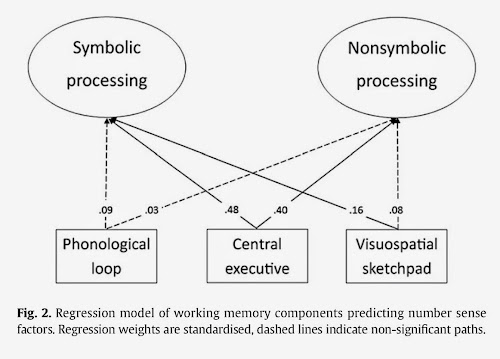 "We found that both symbolic and nonsymbolic processing could be predicted by WM components. However, whereas both the central executive and visuospatial sketchpad could significantly predict symbolic number processing, variance in nonsymbolic processing was only predicted by the central exec-utive, whilst measures of the slave systems added no additional explained variance. Yet, each individual measure of WM did correlate with measures loading onto nonsymbolic NS, highlighting the importance of analysing these associations in integrated models in order to control for shared variance between tasks. The significant associations between symbolic processing and both the central executive and visuospatial sketchpad suggested that to successfully count and use number words and symbols, both visuospatial storage and processing is needed

Posted with Blogsy
Posted by Kevin McGrew at 6:18 PM