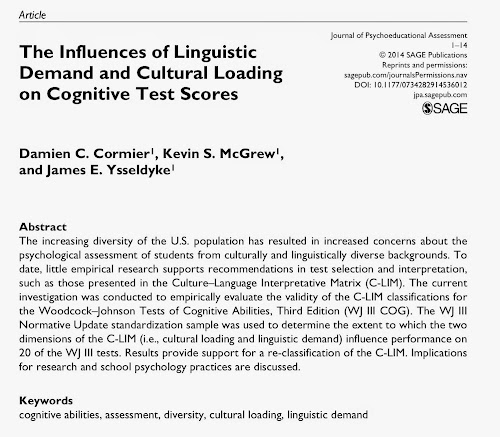 Another article adding to the Cultural-Linquistic Interpretive Matrix research literature. Click on images to enlarge. A copy of the article can be found here. 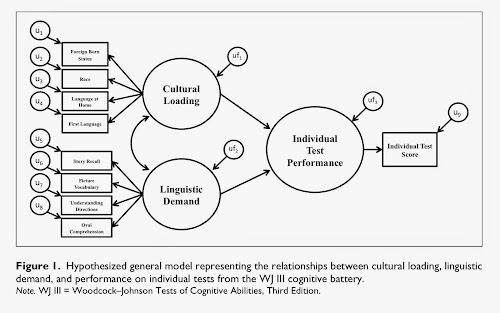 The primary conclusion drawn from this study and previous research is that linguistic demand is an important consideration when selecting and interpreting tests of cognitive abilities. The implications of this study go beyond a re-classification of the C-LIM to emphasizing one of the underlying motivations of the C-LIM's initial inception—the importance of considering a student's linguistic background and abilities prior to selecting, administering, and interpreting tests of cognitive abilities. A comprehensive evaluation that takes a student's linguistic ability into consideration should consider that a student's language ability (i.e., conversational proficiency) might not be an accurate representation of a student's academic language abilities (Cummins, 2008). Thus, it would be beneficial to gather information on a student's academic language abil-ity, due to the relationship between education and IQ (Matarazzo & Herman, 1984). A student's receptive and expressive language abilities may be a worthwhile pursuit in future research, as student's level of conversational proficiency in the classroom may mislead educators and psy-chologists to assume that the student has been exposed to English with the same frequency and depth as his or her peers (Cummins, 2008). Moreover, as suggested by the results of this study, considering the influence of linguistic ability when assessing cognitive abilities should continue to be supported by empirical evidence, instead of school psychologists continuing to rely on informal measures of linguistic ability through language samples and student interviews to gain information on language ability (Ochoa, Galarza, & Gonzalez, 1996).

A second conclusion is that it is unclear how cultural loading can be represented quantitatively in a way that is meaningful both theoretically and practically. An important, albeit unanswered question is, "What variables do practitioners take into account when making decisions about the cultural influences that may affect the selection and interpretation of tests from cognitive batteries?" Flanagan and Ortiz (2001) define cultural loading as "the degree to which a given test requires specific knowledge of or experience with mainstream culture" (p. 243). However, this broad definition does not identify specific variables that practitioners may consider in practice to make these decisions about whether a student's experiences are significantly different from mainstream culture. Given these unanswered questions, it is possible that the underlying reasoning that led to the creation of the C-LIM and its categorization system needs to be re-thought (as also suggested by Styck & Watkins, 2013), particularly with respect to cultural loading. Specifically, it would be important to consider what is occurring and possible in practice, as this is the intended use of the C-LIM."

Posted with Blogsy
Posted by Kevin McGrew at 6:45 PM