I was searching through some journals tonight and discovered that Dr. Richard Woodock's seminal 1990 article, "Theoretical foundations of the WJ-R measures of cognitive ability", is the #1 cited article in the Journal of Psychoeducational Assessment (see image below...click to enlarge) 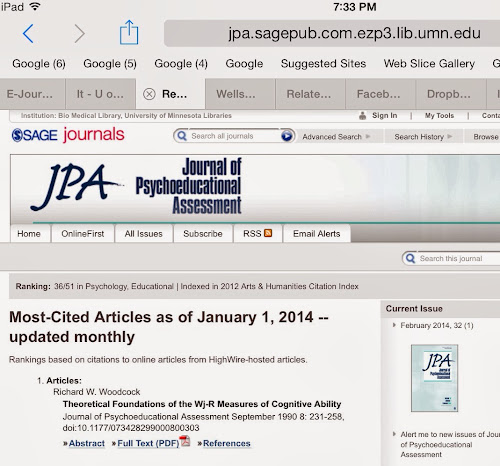 This article is not just about the WJ-R. The article used the then Gf-Gc based WJ-R special study data files to conduct a series of joint CFA with all the major intelligence tests. The most important insight was a mapping of all major IQ tests as per the major broad abilities of what is now call the CHC model of intelligence. It gave birth to the concept of CHC cross-battery assessment. It was a major influential tipping point article in the evolution of the CHC model; primarily by bridging theory and assessment practice. I have written about this important seminal Woodcock paper in McGrew (2005) and Schneider and McGrew (2012). This is also relfected in the CHC Timeline project, a portion which is presented below (click image to enlarge) 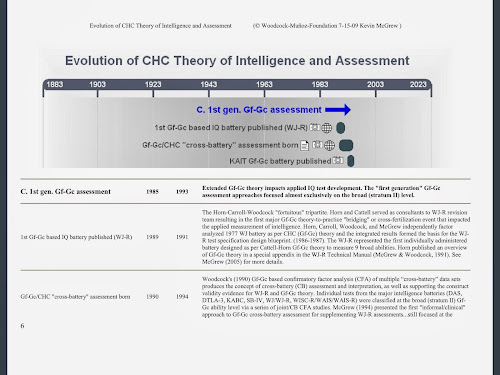 Couple this with the fact that my invited editorial on CHC theory, in the journal Intelligence, is the #1 cited article since 2009 in that journal, and it is my conclusion that CHC theory is now part of mainstream psychology and theories of intelligence.

The tipping point has passed...the CHC taxonomy is now mainstream. Further evidence is the revision or development and analysis of most all intelligence theories as per CHC theory (see the stellar research of Keith and Reynolds and others...here...and here.

Posted with Blogsy
Posted by Kevin McGrew at 7:28 PM