Human processing speed: A hierarchical multidimensional model with g-speed at the apex?

There is an active thread on the NASP (National Association of School Psychologists) listerv this morning re: what is the nature of "processing speed" (Gs as per CHC theory).  Coincidentally, the past few days I have been writing on the psychometric research re: the domain of human cognitive speed.  Dr. Joel Schneider and I are working on a CHC theory chapter manuscript, and this is proposed to be in the chapter.

Related to the text is the following proposed hierarchical model of cognitive speed...which suggests that psychologists need to understand that it may be a much more complex domain with it's own hierarchy and g-type (g-speed) factor at the apex.  The figure below was first included in McGrew and Evan's (2004), where the hierarchy was first proposed.  Joel Schneider has worked his excellent Gv PPT expertise and produced this much prettier version.  Click here and you will see the image from the web page server.

In addition to the more thorough treatment in the McGrew & Evans (2004) document, the following draf text may be useful (Schneider & McGrew, book chapter manuscript in preparation).

Of particular interest, but largely ignored during the past five years, was the conclusion that the speed domains of Gs and Gt might best be represented within the context of a hierarchically organized speed taxonomy with a g-speed factor at the apex (McGrew, 2004; McGrew & Evans, 2004).  This conclusion is echoed by Danthiir, Roberts, Schulze and Wilhelm (2005), who after conducting much of the research that suggests a multidimensional speed hierarchy, suggested that “one distinct possibility is that mental speed tasks form as complex a hierarchy as level (i.e., accuracy) measures from psychometric tasks, with a general mental speed factor at the apex and broad factors of mental speed forming a second underlying tier” (p. 32).  McGrew and Evan’s (2004) hypothesized hierarchy of speed abilities is formally published here for the first time in Figure X 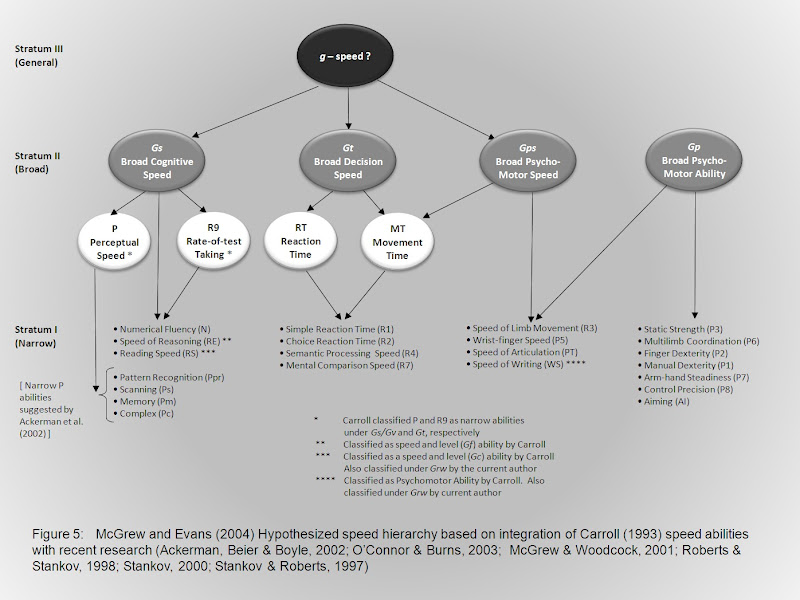