Dr. Tim "Happiness is a latent variable" Keith presented at the 2008 ISIR conference. Tim is a tremendous scholar (and friend) with tremendous expertise in structural equation modeling. He is one of two people I turn to when I need help with running CFA models. He has completed some of the best CFA studies of the major individually administered intelligence batteries. I've collaborated with him on a number of g+specific abilities studies. More recenty he has been turning his atttention to using SEM methods to evaluate gender differences in latent CHC abilities (click the following links to view his recent published research with the WJ III - conflict of interest disclosure--I'm a coauthor of the WJ III).

At the ISIR conference he presented the same type of analysis of the Differential Abilities Scales--II (DAS-II) norm data. The figure below was the best fitting model. The model provides good support for CHC interpretation of the DAS-II. At the conference his primary focus was gender differences. 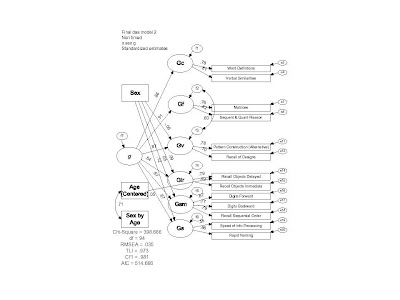 Great Review! Well written and quite descriptive as well.. If any item or topic comes out then you should be the one releasing it to the public and make it known! The way you describe it is very intriguing and feels like candy to my ears, if that really makes any sense :) but you catch my drift.. In one of my classes, we were given a paper with instructions of how to build a swan made of aluminum foil and we had to explain to our group verbally how to construct the swan.. It was difficult! But, manageable and we came second in place, but it was tasky :) Nevertheless if you post anything else up I will most definitely check it out! Great review!