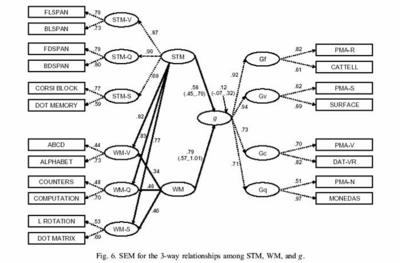 There is no shortage of contemporary research that has reported a strong relation between working memory (Gsm-MW) and g or Gf. Colom et al (in press) have added yet another article ("in press" in Intelligence) that continues to support this strong association. The article and abstract is below.

The above figure (which is from the manuscript) is hard to read...I know. The important point to glean from the crude figure is the fact that in this study Colom et al. specified direct paths from both the latent short-term or memory span (STM) and working memory (WM) factors to g.

An alternative conceptualization, which I (based on the work of others) have presented elsewhere, hypothesizes that memory span (and Gs) have direct effects on working memory, which in turn, has a strong direct path on g. In the models I have presented, the effect of memory span (and Gs) are largely indirect (mediated via working memory). In addition, models that extend this work to the investigation of subsequent direct and indirect effects of memory span (Gsm-MS), Gs, and g on academic achievement have been presented.