I sat in disbelief as I watched Chris Mathews interview with Jack Welch on MSNBC's Hardball yesterday.  The new unemployment figure released this week of 7.8 set off a fire storm of charges that somehow the Obama administration had "cooked the books."  My disbelief in Jack Welch's charges, which he admitted were not based on any evidence, clanged with the unemployment graphs that one constantly see's on the news.  As I looked at the graphs they showed clear systematic up and down trends...trends that are so obvious that anyone should be able to see the trends and easily describe them as going up, flattening out, and then going down.  I decided that I would take this "teachable moment" to provide a brief short course on some applied quantitative statistical methods we quant's in educational psychology use with regularity.  So this is a teaching post, although in the spirit of full disclosure, I should disclose that I voted for Obama in 2008 and plan to vote for him in 2012.

First, if you want to see the video of Mathew's and Welch you can click on the video below:

Below is a version of the graph I am referring to.  It is free and available via Google's public use feature

One can go to the Google data visualization page and move a slide button to view as many years of this data as your heart desires.  I decided to extract just the unemployment figures from Jan, 2008, when Obama took office. I could have gone back farther into the Bush presidency, but I did not want to turn this into a partisan post. 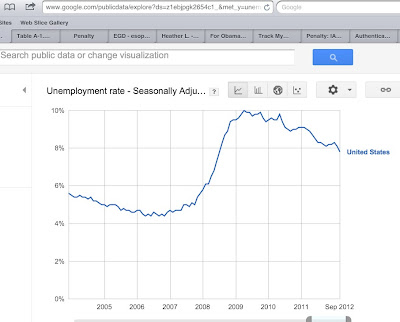 I believe that any reasonably intelligent and objective person who views the above chart would describe it as showing clear systematic trends.  If you start at 2009, the inescapable conclusion is that upon taking office in 2009, given what he was presented with, the unemployment figures demonstrate a clear systematic upward (more unemployment) trend.  Then, just after 2009 there appears to be a plateau.  Then, there is a clear systematic downward trend.  These are objective data points.  These are multiple data points over time.  These multiple data points should inform any reasonably intelligent and objective person that there has been a systematic increase in unemployment during the first 1+ years of Obama's presidency, followed by a plateau, and then a downward trend.  It is so obvious that any third-grader could probably describe this trend.

As an applied quantoid (educational psychologist with expertise in applied statistics, measurement and psychometrics--click here for my bio and vita and other professional information), these set of data are beautiful.  The graph shows clear systematic trends.  When we applied quant's see data like this, we often want to play with such data...which is what I did.  I followed the following steps

1.  I extracted the by-month unemployment percents from Jan 2008 thru October 2012.
2.  I entered these values into standard statistical software for evaluating trends (for those curious, I used the TableCurve2D program that helps scientists find the best set of equations to describe a set of data points).
3.  I ran the software which generated all possible equations that would explain the data.  I then selected the one that was the "best fit" in terms of being systematic--an equation that produced a curve that did not have lots of bumps and squiggles.
4.  The result is below.

As you can see, a very complicated equation (Eqn 7509) can be used to describe the trends in the unemployment data.  (Aren't you wishing you could take back your "but when will I ever use this in real life after I leave high school" comment to your junior and senior high math teachers?)  In reality, you can just ignore the complicated equation.  What is crucial, and which should be obvious to any reasonably intelligent and objective person, is that the curved line (which represents the complex equation) does a nice job of capturing the general up, plateau, and down trends of the unemployment stats from 2008 to 2012. It is so obvious.  It is so clear.

Just how good is the best fitting equation?  If you look at the second line of numbers at the top of the graph, you will see an r2 value of 0.98913471.  To make things easier, lets round to two digits.  R2 = .99.  What does this mean?  This means that the above equation (represented by the curve over the raw unemployment figures) explains 99% of the trends.  In quant speak, we say that it "accounts for 99% of the variance").  This is HUGE.  One can only explain 100% of anything, and we are just under that perfect value.

This means that there is a clear systematic pattern to the unemployment data from 2008 thru October 2012.  Now, to address Jack Welch's charges (with his own admission of "no evidence") that it is magical that post-debate (and only weeks before the election) the unemployment value magically dips below the magical threshold value of 8.0 % (a threshold set by the republican's as the bar Obama has been unable to reach--and thus a sign he is not improving the economy), and this is  evidence of "cooking of the books," I offer the following scientific-based conclusions.

1.  If one uses the 99% explanatory equation and uses it to predict what the October value would be prior to it being announced, the predicted value would have been 7.91 (see above figure).  Business folks, economists and financial investors use similar statistical tools to monitor trends and make predictions, and this is often how such executives and financial folks make their money--finding a good prediction equation and then investing or moving money around (or selling or buying stock) given predicted trends over the next few months.  So, prior to the announcement of the 7.8% value, the best prediction of what the October value might have been was still below 8.0 %.  It was 7.91.  Now, that is just under 8.0%, but nevertheless, it is under 8.0% and and not far from the actual reported value of 7.8%.

2.  Given the conclusions and stats in point #1, the 7.8% value is very consistent with the 99% explained trend and should not be viewed as some kind of magical "outlier" number that is evidence of "book cooking."  The 7.8% value is in complete agreement with the systematic statistical modeled trend based on 57 different data points (57 months).  To claim that 7.8 is a sign of something completely unexpected baffles my trained statistical mind.

3.  As can be seen in the above figure, I then used the equation to predict the unemployment values for the next two months...7.83 and 7.74.

4.  It appears the unemployment trends have been bent during the past 3.5 years...and this is positive bending...not trickery.  The above figure shows obvious "unemployment trend bending"-- a very negative upward trend was halted and has now been reversed.

In summary, the unemployment statistics since 2012 show clear systematic trends that can be mathematically modeled and used for predictive purposes.  The 7.8 % value is very much in line with the trends.  The 7.8% value is not some kind of "outlier" or "anomalous" data point.  More important, and something that escapes my scientific quantoid mind, is how intelligent people (and especially a successful CEO and business person) can not see the obvious downward trend in unemployment since approximately the middle of 2009.  Am I missing something?

We in the social behavioral sciences hardly ever see such systematic data over time as we deal with phenomena that typically one can only account for 40% to 60% of the trends.  Being able to account for 99% of the trends via a mathematical objective equation has touched my quantitative soul. Finally, I hope this post demonstrates the importance of using applied statistical methods to explain and model systematic trends in data that allow for subsequent prediction.

Getting back to my field, applied quant's in psychology use statistical curve fitting methods to develop norms for tests, find the best prediction of outcomes from a combination of variables, etc.  Some examples are in one module of my applied test development series of PPT modules.
Posted by Kevin McGrew at 10:20 AM