What are basic elementary cognitive mechanisms/processes that contribute to (cause?) g (general intelligence).

As has been discussed many times previously on this blog, there has been a significant amount of recent research suggesting that working memory (Gsm-MW) and processing speed (Gs) may be causal mechanisms of g (click here for a brief summary and some CHC-based causal models I've run). In the article below, Kaufman et al (hereafter referred to as the "authors") investigate whether associative learning may be another causative mechanism...above and beyond the contribution of working memory and processing speed.

the existence of general intelligence (g), in the sense of a statistical feature (a “positive manifold”), is a robustfinding, it is less clear what the mechanisms are that support g. The best established candidate processes, as mechanistic substrates of g, are processing speed (Deary, 2001) and working memory (Conway, Jarrold, Kane, Miyake, & Towse, 2007)

The current study investigated associative learning as a potential additional candidate process, which might contribute to g over and above processing speed and working memory. Only recently has associative learning become a serious contender as a substrate of g (Alexander & Smales, 1997; Tamez, Myerson, & Hale, 2008; Williams, Myerson, & Hale, 2008; Williams & Pearlberg, 2006). There is good reason, however, to suspect that the ability to learn associations might support g. Intelligent behavior seems certain to require memory for patterns of associations among stimuli, and one of the original purposes of intelligence tests was to assess students' ability to learn (Binet & Simon, 1916). Relations among associative learning, general cognitive ability, and cognitive mechanisms that subserve general cognitive ability are thus of interest for both theoretical and historical reasons.

The authors define associative learning as "the ability to remember and voluntarily recall specific associations between stimuli" In this regard, it is similar to associative memory (MA) under Glr as per the CHC taxonomy.

Although early studies found a weak or no relation between associative learning and general cognitive ability (Malmi, Underwood, & Carroll, 1979; Underwood, Boruch, & Malmi, 1978; Woodrow, 1938, 1946), the failure to find a relation seems likely to be due to the fact that the associative learning tests that were used in these studies were easy and thus unlikely to be related to complex cognition

The sample was "169 participants (54 males and 115 females) included in the analysis were aged 16–18 years, and attended a selective Sixth Form College (which takes high-achieving students who are in their last 2 years of secondary education) in Cambridge, England."

The authors operationally defined an associative learning (AL) latent factor (Glr-MA as per CHC as interpreted by the blogmaster) via multiple associative learning indicators (see article). Gf was operationally measured by the Raven's advanced progressive matrices (RAPM), DAT verbal reasoning test and the Mental rotations test. Mulitple indicators of Gs included the Verbal speed test (Speed-V) from the Berlin model of Intelligence Structure, the Numerical speed test (Speed-N), and the Speed of Information Processing sub-test from the British Ability Scales. The working memory measurement model consisted of the Operation span task. The authors used structural equation method to test predictions about the independent prediction of g by associative learning (Glr-MA), working memory (Gsm-MW), and processing speed (Gs). The final causal model can be seen in the included visual-graphic causal model diagram. Note that, as per the CHC taxonomy, I would relabel the latent factors as Glr-MA (not AL), Gsm-MW (not WM), and Gs (the same as the authors). 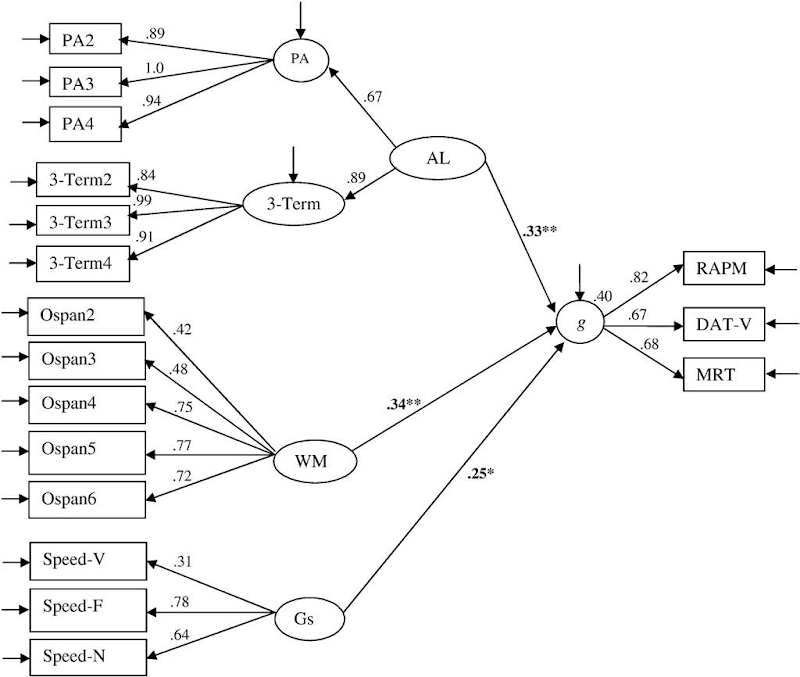 The primary results, as represented in the above causal model diagram:

showed that associative learning, working memory, and processing speed all made statistically independent contributions to g. This finding suggests that each of these elementary cognitive processes may represent a mechanism that contributes differentially to general intelligence

The results of the current study add to a growing literature on the existence of multiple cognitive mechanisms that support general cognitive ability (Sternberg & Pretz, 2005). Our findings suggest that multiple cognitive processes — including the abilities to process information quickly, to maintain, update, and manipulate information in working memory, and to learn specific associations between stimuli — should contribute to performance on any highly g-loaded task. Identification of separable elementary cognitive mechanisms that support g should further attempt to develop neurobiological theories of intelligence. Such theories may help to resolve current debates regarding the nature of the mechanisms underlying g (e.g., Colom, Franciso, Quiroga, Shih, & FloresMendoza, 2008). Evidence exists already that working memory and associative learning rely on different regions of the PFC (Petrides, 1995, 2000; Petrides et al., 1993), and processing speed seems likely to be determined by a distinct set of biological parameters that are not yet known. The investigation of the precise number and nature of the mechanisms that underlie g remains a promising line of research.