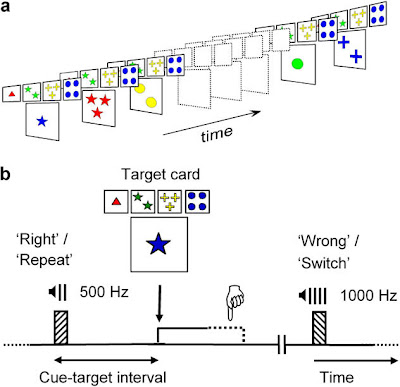 Does the WCST measure executive functioning? There is little doubt that the WCST is one of the predominant tests used in neuropsychological assessment to assess executive functions. However, studies have recently questioned the validity of drawing inferences about the site of executive functions (the frontal lobes of the brain) from performance on the WCST. The following "in press" article, which presents a nice review of the literature, suggests that in it's current administration formats the WCST is not the sensitive measure of frontal lobe executive functioning as is often thought. Below I present the abstract, a few select passages, and the primary conclusion from this excellent review article.

For over four decades the Wisconsin Card Sorting Test (WCST) has been one of the most distinctive tests of prefrontal function. Clinical research and recent brain imaging have brought into question the validity and specificity of this test as a marker of frontal dysfunction. Clinical studies with neurological patients have confirmed that, in its traditional form, the WCST fails to discriminate between frontal and non-frontal lesions. In addition, functional brain imaging studies show rapid and widespread activation across frontal and non-frontal brain regions during WCST performance. These studies suggest that the concept of an anatomically pure test of prefrontal function is not only empirically unattainable, but also theoretically inaccurate. The aim of the present review is to examine the causes of these criticisms and to resolve them by incorporating new methodological and conceptual advances in order to improve the construct validity of WCST scores and their relationship to prefrontal executive functions. We conclude that these objectives can be achieved by drawing on theory-guided experimental design, and on precise spatial and temporal sampling of brain activity, and then exemplify this using an integrative model of prefrontal function [i.e., Miller, E. K. (2000). The prefrontal cortex and cognitive control. Nature Reviews Neuroscience, 1, 59–65.] combined with the formal information theoretical approach to cognitive control [Koechlin, E., & Summerfield, C. (2007). An information theoretical approach to prefrontal executive function. Trends in Cognitive Sciences, 11, 229–235.].

According to the authors, there are at least two different systems of administration and scoring of the WCST. There is the "standard version by Grant and Berg (1948) with Milner´s (1963) correction criteria and the shortened version by Heaton (Heaton, 1981; Heaton, Chelune, Talley, Kay, & Curtis, 1993 ). Furthermore, the test has been administered in modified versions by Nelson (1976), Delis, Squire, Bihrle, and Massman (1992), and Barceló (1999, 2003)."

In the conventional administration:

the WCST consists of four key cards and 128 response cards with geometric figures that vary according to three perceptual dimensions (color, form, or number). The task requires subjects to find the correct classification principle by trial and error and examiner feedback. Once the subject chooses the correct rule they must maintain this sorting principle (or set) across changing stimulus conditions while ignoring the other – now irrelevant – stimulus dimensions. After ten consecutive correct matches, the classification principle changes without warning, demanding a flexible shift in set. The WCST is not timed and sorting continues until all cards are sorted or a maximum of six correct sorting criteria have been reached.

The present interest in prefrontal cortex function has renewed the use of the WCST in clinical and experimental settings. However, much criticism has questioned the utility of this test as a marker of prefrontal function. A critical review of clinical studies suggests that the original WCST does not distinguish between frontal and non-frontal lesions. Likewise, functional neuroimaging studies confirm that delivery of negative feedback during WCST rule transitions activates a widespread network of frontal and non-frontal regions within a split-second time scale. New methodological and conceptual advances from theory-guided experimental designs, precise spatial and temporal sampling of brain activity, and modern integrative models of prefrontal function (Miller, 2000) combined with a formal information theoretical approach to cognitive control (Koechlin & Summerfield, 2007) can improve our understanding of the WCST and its relationship to prefrontal executive functions. These advances suggest that simple modifications of the original version of the WCST may offer more valid and reliable measures of key component operations, such as the maintenance, shifting, and updating of task-set information over trials. Fast brain imaging techniques help us put into perspective the specificity of the test as a marker of prefrontal function as a key node within the widely distributed and tightly interconnected neural networks subserving human cognition.