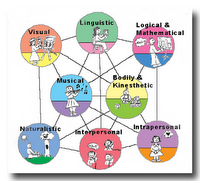 Interesting post on the Gene Expression blog regarding recent study in journal of Intelligence that provides little support for Howard Garnder's MI theory. The less than positive comments/conclusions are not surprising to me. I first wrote about Gardner's MI theory back in 1993 and 1995. This material was subsequently incorporated into the Intelligence Test Desk References (ITDR), coauthored with Dr. Dawn Flanagan. Below is the what we wrote re: Gardner's MI theory in the ITDR.

Gardner described seven types of intelligence, including logical-mathematical, linguistic, musical, spatial, bodily-kinesthetic, interpersonal, and intrapersonal. The terms Gardner uses to label his seven intelligences are dramatically different from the terminology of Gf-Gc theory. What are the differences and similarities between the Gf-Gc and Gardner multiple intelligences theories?

In contrast to structural Gf-Gc theory, Gardner's theory of multiple intelligences focuses on a different aspect of human performance, namely, expertise or aptitude. Individuals with specific expertise or aptitudes likely have unique combinations of certain Gf-Gc abilities together with abilities in the other domains of personal competence. Gardner's theory is not an attempt to isolate the basic domains or elements of intelligence (a function performed by Gf-Gc theory), but rather, describes different patterns of expertise or aptitude based on specific combinations of Gf-Gc abilities and other personal competencies. In this regard, Gardner’s different intelligences are conceptually similar to Snow’s (1989, 1991, 1992) aptitude complexes that define aptitudes in the broadest sense (i.e., including both cognitive and conative structures).

Although Gardner’s theory has considerable appeal, it has been found wanting when subjected to empirical evaluation. In a review of Gardner’s (1983) Frames of Mind, the book that describes his Multiple Intelligences (MI) theory, Lubinski and Benbow (1995) conclude that there is “little empirical support for or against the unique features of Gardner’s ideas. Before MI theory can be taken seriously by the scientific community and policy makers, Gardner’s (1983) bold theoretical skeleton is in need of empirical flesh” (p. 937). According to Carroll (1993), Gardner “discounts multifactorial theories of intelligence...because, he claims, they fail to account for the full diversity of abilities that can be observed. Generally, Gardner has neglected the evidence on the basis of which the present three-stratum theory has been constructed” (p. 641). Furthermore, in a review and comparison of structural Gf-Gc theory, Gardner’s Multiple Intelligences theory, and Sternberg’s Triarchic theory (Sternberg, 1997), Messick (1992) characterized Gardner’s (as well as Sternberg’s) theory as appealing selectively to factor analytic research and ignoring or downplaying factor analytic research that challenges his model. Thus, it seems clear that the descriptions of Gardner’s seven multiple intelligences “do not derive from any consistent set of empirical data and can be tied to data only in piecemeal fashion, thereby being constantly threatened by the perverse human tendency to highlight results that are consonant with the theory’s logic over findings that are dissonant” (Messick, 1992; p. 368). Bouchard (1984), Scarr (1985), and Snow (1985) also questioned the empirical support for Gardner’s theory.