What does the WISC-IV measure? CHC-organized CFA study 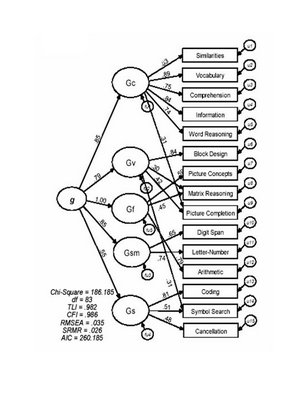 [Double click to make image larger.....sorry for the poor quality. It is the best I can do at this time]

The latest issue of School Psychology Review has an excellent article on confirmatory factor analysis (CFA) of the WISC-IV norm data, by a research team led by Tim Keith. As I've mentioned before, I always read anything written by Tim Keith, particularly if it involves structural equation modeling (SEM) of cognitive batteries. In the language of the PGA golf tour.....Tim is "dah man" in my book for good analyses (with SEM/CFA methods) in the arena of applied psychometrics.

Currently a pdf copy of this journal issues is not available...so no link to the article is provided. Below is the formal reference citation, journal abstract, select important comments/conclusions by the researchers, one editorial comment by this blogmaster, and an invitation to anyone at Psych Corp to provide a guest blog post response.
Abtstract

Thank you for pointing out this very important article. It seems like what was done with the CAS was done again with the WISC-IV. The CFA seemed to concur with what most who are in the know on CHC theory knew (the suspected broad ability relators have been embedded in the templates for some time).

I think your twelve step program needs a sequel!

Thanks for the thoughts Joel. If the working memory load of Arithmetic has "been increased", then this would need to be empirically verified in EFA/CFA studies that include enough indicators (at least 3 per factor) to include the latent factors of Gq, Gsm, Gf, and Gs. I would further argue that the Gsm broad factor would need to represented by separate MS (Memory Span) and Working Memory (MW) narrow factors. Similarly, it would be ideal if the Gf factor had enough indicators of Induction (I), gen. seq. reasoning (RG; aka deduction), and quantitative reasoning (RQ). Only when all of these factors are indicated (with sufficient indicators in the measurement model) will someone finally be able to answer some of the "still lingering" questions about Arithmetic. This sounds like a nice masters/PhD thesis for someone. Until I see the empirical data that supports the "increased working memory load" of Arithmetic, I don't buy it....as the extant EFA/CFA studies to date do not support this. Show me the beef (data)?