Shared via feedly // published on The Neurocritic // visit site 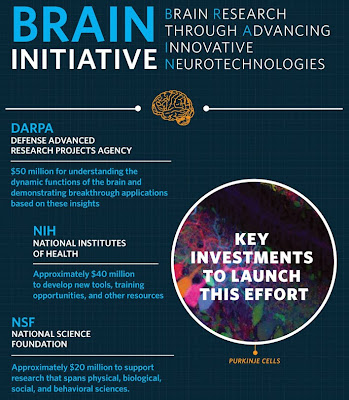 National Institutes of Health (NIH) has finally released detailed descriptions for six separate funding opportunities in support of the BRAIN Initiative. If you're big on cells, circuits, and/or technologies, one of these programs could be for you. NIH hopes to award $40 million by the end of the fiscal year (September 30, 2014). The application deadlines are all in March 2014.

In October, Defense Advanced Research Projects Agency (DARPA) announced that it would spend $70 million over the next five years to develop and improve deep brain stimulation (DBS) techniques. The approaches of the two agencies are quite different, as outlined in this post.

The NIH Director's BRAIN Advisory Committee issued its Interim Report (PDF) on September 16. The report focused on animal models, including improvement of technologies for recording neuronal activity and manipulating circuit function. The new Requests for Applications (RFAs) reflect the high-priority research areas for FY 2014. Here are concise summaries of the new funding opportunities from the White House:

As you can see, Cellular/Molecular and Systems/Circuits neuroscience researchers will benefit the most, along with engineers, physicists, and other technology-development types.

Here are the RFA summaries from NIH:

Is this a call for DARPA-lite projects? Or for proposals as far-fetched as calcium imaging in humans? As the RFA explains...

The long-term objective is to develop tools for the precise imaging of molecules, cells, and circuits in the human brain.  Applications submitted in response to this R24 FOA should support the formation and development of interdisciplinary teams that will plan innovative approaches to substantively expand the ways by which brain structure and function can be imaged in humans.  These R24 awards will support planning activities such as meetings, prototype development projects and small scale pilot studies in mammals or humans that would provide proof of principle for transformative approaches to assessing human brain structure and function.  The proposed concepts are expected to be high-risk, high-impact, and disruptive (c.f. C. Christensen "The Innovator's Dilemma", 1997; http://en.wikipedia.org/wiki/Disruptive_innovation).

What might these [post-]BOLD new BRAIN scanners of the future look like? This question was addressed by practiCal fMRI in September:

This week's interim report from the BRAIN Initiative's working group is an opportunity for all of us involved in fMRI to think seriously about our tools. We've come a long way with BOLD contrast to be sure, even though we don't fully understand its origins or its complexities. ...

I can't help but wonder what my fMRI scanner might look like if it was designed specifically for task. Would the polarizing magnet be horizontal or would a subject sit on a chair in a vertical bore? How large would the polarizing magnet be, and what would be its field strength? The gradient set specifications? And finally, if I'm not totally sold on BOLD contrast as my reporting mechanism for neural activity, what sort of signal do I really want? In all cases I am especially interested in why I should prefer one particular answer over the other alternatives.

Note that I'm not suggesting we all dream of voltage-sensitive contrast agents. That's the point of the BRAIN Initiative according to my reading of it. All I'm suggesting is that we spend a few moments considering what we are currently doing, and whether there might be a better way...

A Tale of Two BRAINS: #BRAINI and DARPA's SUBNETS


Anyone who is awarded one of these #BRAINI grants is free to use this nifty badge on all their promotional materials and publications. 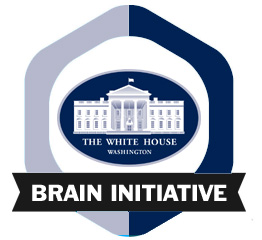 The BRAIN Initiative badge is awarded by President Obama to research supported by his $100 million #BRAINI. This bold new research effort will include advances in nanotechnology and purely exploratory efforts to record from thousands of neurons simultaneously.