Implications of 20 Years of CHC Cognitive-Achievement Research: Back-to-the-Future and Beyond CHC 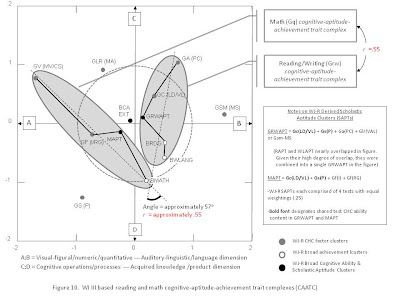 [Click image to enlarge]
The key slides from my presentation at the first Richard Woodcock Institute on Cognitive Assessment are now posted at SlideShare.  I thought I had posted these before, but I can't seem to find them.  So here they are for the first (or second) time.  Below is the abstract for the paper that I also submitted--to be published eventually by the WMF Press.

Much has been learned about CHC CHC COG-->ACH relations during the past 20 years (McGrew & Wendling’s, 2010).  This paper built on this extant research by first clarifying the definitions of abilities, cognitive abilities, achievement abilities, and aptitudes.  Differences between domain-general and domain-specific CHC predictors of school achievement were defined.   The promise of Kafuman’s “intelligent” intelligence testing approach was illustrated with two approaches to CHC-based selective referral-focused assessment (SRFA).  Next, a number of new intelligent test design (ITD) principles were described and demonstrated via a series of exploratory data analyses that employed a variety of data analytic tools (multiple regression, SEM causal modeling, multidimensional scaling).  The ITD principles and analyses resulted in the proposal to construct developmentally-sensitive CHC-consistent scholastic aptitude clusters, measures that can play an important role in contemporary third method (pattern of strength and weakness) approaches to SLD identification.
The need to move beyond simplistic conceptualizations of COG COG-->ACH relations and SLD identification models was argued and demonstrated via the presentation and discussion of CHC COG-->ACH causal SEM models.  Another example was the proposal to identify and quantify cognitive-aptitude-achievement trait complexes (CAATCs).  A revision in current PSW third-method SLD models was proposed that would integrate CAATCs.  Finally, the need to incorporate the degree of cognitive complexity of tests and composite scores within CHC domains in the design and organization of intelligence test batteries (to improve the prediction of school achievement) was proposed.  The various proposals presented in this paper represented a mixture of (a) a call to return to old ideas with new methods (Back-to-the-Future) or (b) the embracing of new ideas, concepts and methods that require psychologists to move beyond the confines of the dominant CHC taxonomy of human cognitive abilities (i.e., Beyond CHC).