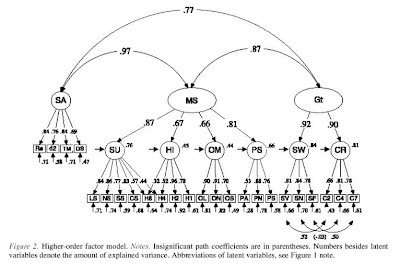 According to a recent CFA study of 199 college students, traditional paper-and-pencil measures of broad cognitive speed (Gs) and sustained attention (SA) may not be measuring different constructs given the shared speeded performance constraint. However, broad decision speed (Gt), as measured by computerized tests, does appear to represent a construct separate from Gs/SA--although the difference could be related to method factor variance (paper/pencil vs computer).

According to Krumm et al. (2008), SA and Gs (which they refer to as mental speed-MS) are theoretically conceptualized to represent distinct constructs. "Individual difference research has always distinguished between MS and SA measures (see Stankov, 1988)."

"Sustained attention (SA) may be defined as the 'ability to allocate processing resources for quite a time (up to some minutes) to a specific task demand while ignoring new stimuli that also demand attention' (Schweizer, 2005, p. 46). Similarly, Hoffmann (1993) describes SA as the ability to devotedly apply oneself to a task while ignoring distractions."

The authors point out that although SA and Gs are conceptually distinct cognitive constructs, they are typically assessed with very similar tasks--simple cognitive tasks where "performance largely relies on the participants’ speed of task processing (i.e., how quickly and correctly one can perform the simple cognitive tasks)."

The CFA results found a near unity (.97) correlation between SA and Gs (see figure above).

It is suggested that clinicians and researchers may need to pursue new approaches to differentiating the measurement of SA and Gs. Furthermore, these findings suggest that the clinical interpretation of Gs tests on individually administered intelligence batteries may be confounded by sustained attention. Most clinicians and books on intelligence test interpretation have typically made this point---and have suggested that sustained attention may be measured by tests that typically are interpreted to measure Gs-like abilities---e.g., perceptual speed (P). It is possible that sustained attention may play a larger role on traditional paper-and-pencil tests than previously recognized.

Of course, caveats are necessary. This study is limited to a young adult age range and 199 subjects. It would be nice to see simlar studies across the entire age range.