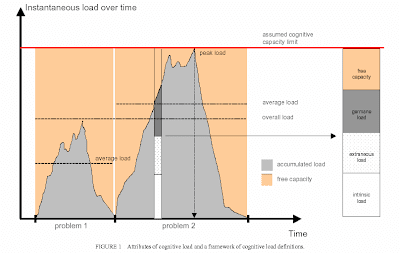 Yesterday I made a post to the NASP listserv, with a redirect to a post at this blog, regarding the importance of working memory to cognitive functioning and school learning. Wally Howe, president of Psychological Assessments Australia, made a wonderful follow-up post regarding the relevance of cognitive load theory to instruction-- a theory grounded heavily in the notion of designing instruction around the constraints of working memory.

Wally's responses to my NASP post (and redirect to detailed blog post) follow below. Following Wally's comments are references I found in my IAP Reference Database. For those references where I had previously harvested copies of the article (n=8) there are "click here" links to the articles.

I have always intended to review and summarize this literature (see 4 prior posts on cognitive load theory)...but alas.....I've never found the time. Maybe some reader will be interested in reading the articles (via the links below) and will be willing to write a guest blog post. If anyone is interested in drafting such a guest post, please contact me at iap@earthlink.net.

Wally Howe comments: Just a comment on this thread. I am not entirely up to date on all the literature, but thought I might put in my two cents worth for comment. I have studied under John Sweller at the University of NSW. Kevin, you have mentioned his work previously as being of interest and although he doesn't work in individual differences, his work appears to overlap with this discussion of MW. Sweller has researched Cognitive Load Theory. This research, mainly using adolescents working High School math problems, has looked at how different ways of formatting materials effects learning. He argues that the main factor in learning complex material is working memory - it has huge limitations, so to learn, humans have to work within these limitations (and even find ways around these limitations). Thus any method that reduces the cognitive load on working memory is useful (eg worked examples, using both visual and auditory working memory together etc). He has an evolutionary explanation for this, too, as it is somewhat unusual that a limitation like this has survived for so long if one believes in natural selection.

John hasn't researched how individual differences in working memory (or different aspects of it) effect learning, which is more yours and my interest, Kevin, but his model of human learning puts MW firmly at the centre, as does the research you have just outlined.

At NASP recently, one presenter suggested that "Intelligence is what allows students to learn in spite of their teachers" - a somewhat cynical view, you may think, but a comment worthy of further thought. If MW is central to learning, those with high capabilities in this area will not be as effected by cognitive load as those not so lucky - the formatting of learning materials for example, won't be as critical for them. The knowledge of how cognitive load effects learning isn't widely appreciated (or even researched in detail), so it's no surprise that teachers do not consciously or systematically design lessons to reduce it (so don't deserve blame - ignorance is a defence in my opinion). Thus these lucky students build procedural knowledge more quickly and so are advantaged increasingly as they learn more and come to be be seen as "highly intelligent". I conceptualise Gs, or fluency in some contexts, as the speed with which information can move between long term memory (knowledge store) and working memory and the presenting problem. Given that working memory decays very quickly, the speed with which an individual can move information back and forth helps immensely, both in accessing data and refreshing data.

I also agree with your premise that there are different factors underpinning the construct of MW that come in to play with different people - speed, size of store, speed of decay etc, but we don't seem to measure too many of these at the moment. There must also be interact ional effects too, just to make the picture even more complex. MW may well be too global a construct to fully explain a wide range of individual differences.

Sweller's research is very practical. Even if we can tease out all the factors underpinning MW, we still have to design teaching materials and programs that make learning more efficient or in some cases, possible, in spite of problems in these complex cognitive processes.