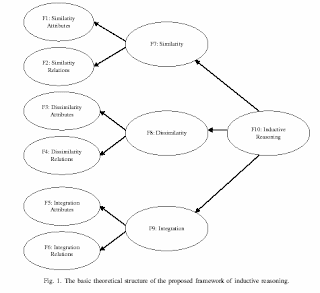 I just ran across an interesting article that proposes a hierarchical substructure to quantitative reasoning (Gf-RQ), based on the work of Klauer. According to the authors, inductive quantitative reasoning is conceptualized to consist of three sub-abilities (similarity, dissimilarity, integration), which in turn, subsume 6 narrower abilities. In the language of CHC theory, this model specifies new sub-stratum abilities below the narrow stratum I abilities. The model is represented in the figure at the top of this post.

The authors gathered data on 135 subjects and fit a 3-level hierarchical model. They used confirmatory factor analysis methods and reported a good model fit. Unfortunately, I see flaws in the analysis. The major flaw is that they fit only one model. No competing models were specified and evaluated. The finding that two of the second-order factors were essentially isomorphic (factor loadings = .99) with the highest order inductive RQ factor suggests that more simple models should have been evaluated. Thus, I would not place major stock in this structural study at this time (I'm not going to run out and suggest revision to the CHC taxonomic framework). It would have been nice if the authors would have reported the correlation matrix so independent researchers could have tested alternative models.

On a positive note.....the proposed hierarchical structure does provide a potentially useful heuristic for conceptualizing a task-analysis approach for developing mathematical reasoning interventions. The authors should be commended for their initial attempt to empirically evaluate their proposed RQ structural model...they just should have gone further in the analysis via the evaluation of competing models.

Powered by ScribeFire.
Posted by Kevin McGrew at 8:03 AM