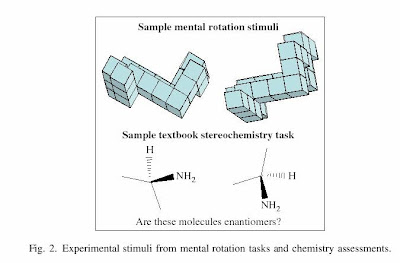 Either there has been increased research interest in the role of spatial visualization (Gv-Vz) strategies/abilities and cognitive/academic performance as of late, or, I've been selectively attentive to articles that address this topic in my weekly searches of the social and behavioral research literature. Regardless, during the past two weeks I've run across three additional studies that have investigated how individuals approach classic block rotation visualization tasks and/or how these abilities/strategies can be modified via training.
Briefly, "mental rotation refers to the cognitive process of imagining how an object would look if rotated away from the orientation in which it is actually presented" (Jansen-Osmann & Heil, in press)

First, I've previously commented on gender studies that have suggested two differing cognitive strategies that individuals adopt when approachinging visual mental rotation tasks. As summarized in my prior post:
Now, Stieff (2007) has added to this literature vis-a-vis the exploration of the use of these two different strategies in scientific reasoning. Based on three separate investigations, Stieff concluded the following, which they then discuss in terms of practical applications for differential instruction.
Next, Wiedenbauer and Jansen-Osmann (in press) present findings that suggest that it may be possible to improve mental rotation ability in children via manual visualization training. Jansen-Osmann strikes again, this time in association with with Heil (Jansen-Osmann & Heil, in press), in a developmental study of potential qualitative differences between children and adults in rotational uncertainty.

Powered by ScribeFire.
Posted by Kevin McGrew at 1:07 PM

For the past two years, there have been numerous papers from Bouchard and Johnson on the subject of their VPR model, which is strongly focused on rotation as one of the three factors that model produces as the final set of group factors. Among the papers that have appeared:

The structure of human intelligence: It is verbal, perceptual, and image rotation (VPR), not fluid and crystallized

I was particularly interested in what appears to me to be a contrast between the VPR model and the C-H-C model used in WJ3. Although I have not discussed these differences with Bouchard, but I have done so at some length with Johnson. At this point, it is my conclusion that neither approach is right or wrong on the basis of the other and I am now less bothered by what initially appeared to be a conflict. Johnson/Bouchard argue that the VPR model presents a better fit to the data they have examined than other models. It is somewhat unsettling that the various VPR papers have come from the same source and have not yet spawned confirmation or dispute from other researchers.

Perhaps the most important outcome of Wendy's focus on the VPR model is that it recognizes the importance of the R component. Otherwise there may or may not remain a disagreement among researchers with respect to the distinction between crystallized and fluid intelligence. If Gc is taken to be a specific way of measuring Gf, the objections from Johnson either vanish or become less of an issue; but if Gc and Gf are taken to be separate entities, there is a conflict. Jensen once pointed out that a sufficiently large number of Gc test items would yield a pure (presumably he did not mean "perfect") measurement of g.

Bob. Yes.....I've been very aware of the Johnson and Bouchard writings over the past year or so and their emphasis on mental rotation. I've been meaning to write something about their articles....but have never found sufficient time....as I really need to read and study their material in depths before making any commments.

My first blush reaction has been that although their model may fit their data the best, they are only working with a select number of databases. Carroll's massive work spans hundreds of datasets. Yes...Johnson and Bouchard are working with large samples, but my knee jerk reaction is one should not immediately endorse their VPR model until it is replicated by others in many other data sets. But again, these are just my knee jerk reactions based on a quick skim of their articles.