A prevailing topic in personality neuroscience is the question how personality traits are
reflected in the brain. Functional and structural networks have been examined by functional and structural magnetic resonance imaging, however, the structural correlates of functionally defined networks have not been investigated in a personality context. By using the Temperament and Character Inventory (TCI) and Diffusion Tensor Imaging (DTI), the present study assesses in a sample of 116 healthy participants how personality traits proposed in the framework of the biopsychosocial theory on personality relate to white matter pathways delineated by functional network imaging. We show that the character trait self-directedness relates to the overall microstructural integrity of white matter tracts constituting the salience network as indicated by DTI-derived measures. Self-directedness has been proposed as the executive control component of personality and describes the tendency to stay focused on the attainment of long-term goals. The present finding corroborates the view of the salience network as an executive control network that serves maintenance of rules and task-sets to guide ongoing behavior.

Click here for info regarding one of the better brain network overview articles by Bressler and Menon. 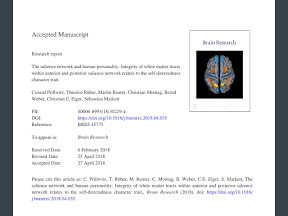