We tested whether mental rotation training improved math performance in 6- to 8-year-olds. Children were pretested on a range of number and math skills. Then one group received a single session of mental rotation training using an object completion task that had previously improved spatial ability in children this age (Ehrlich, Levine, & Goldin-Meadow, 2006). The remaining children completed crossword puzzles instead. Children's posttest scores revealed that those in the spatial training group improved significantly on calculation problems. In contrast, children in the control group did not improve on any math tasks. Further analyses revealed that the spatial training group's improvement was largely due to better performance on missing term problems (e.g., 4+_____=11) 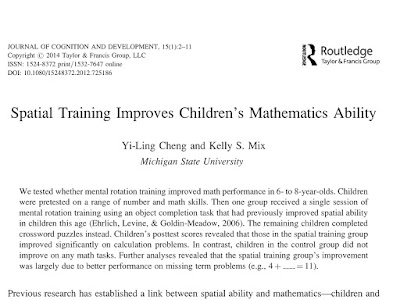 - Posted using BlogPress from my iPad
Posted by Kevin McGrew at 1:17 PM