The impact of the CHC theory of intelligence: Impacting other disciplines and applied applications 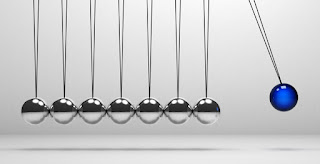 In a prior post I documented the global impact of the CHC theory of intelligence.  Another indicator of the impact of the CHC model and taxonomy is how it has been recognized and used for important research functions in psychology, other disciplines, and applied settings. A number of diverse examples are summarized here.

The common CHC nomenclature assists different researchers better understand what they are measuring and facilitates better communication between and among professionals and scholars (McGrew, 1997). The CHC taxonomy has been used to organize meta-analyses that investigate the relations between cognitive ability constructs and other variables across a large number of studies. An excellent example is Loughmana, Bowdena, and D’Souzac’s (2014) use of the CHC taxonomy to classify a diverse set of cognitive tests used across 26 different studies of idiopathic generalized epilepsy. By classifying the dependent cognitive variables as per the CHC taxonomy, these researchers were able to use meta-analytic methods to present cognitive deficit effect sizes associated with idiopathic generalized epilepsy by the CHC domains of Gc, Gf, Glr, Gs, Gsm, Gv, as well as executive functions. The common CHC taxonomic coding system allowed for a diverse variety of cognitive measures to be synthesized in theoretically meaningful comparisons across the extant research literature.  Below is a sample Gf table from the meta-analysis (click on image to enlarge) 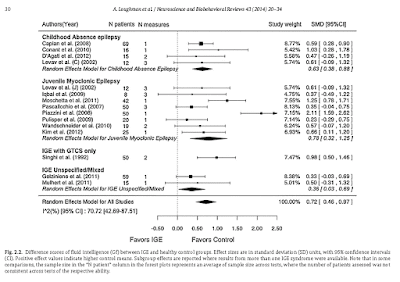 Two other examples come from health researchers studying the link between nutritional enhancements, cancer and cognitive functioning. Stough and Passe (Stough & Pase, 2015; Pase &Stough, 2014) have conducted and reviewed research on pharmacological methods for improving cognitive functioning with a particular focus on dietary and herbal supplements. Similar to research in many areas of psychology, they noted that:
Researchers at the US National Cancer Institute have also conceptualized measures of cognitive functioning as per CHC theory in research focused on the impact of specific types of cancer on cognitive outcomes (e.g., “Looking At Cancer Related Cognitive Impairment Through The Lens Of CHC Theory: Does It Improve Our Vision?”  Padgett, 2015).

Psychologists working in military and defense settings have also recognized the value of the CHC taxonomy in military selection and classification research (Rumsey & Arabian, 2014). A National Research Council report on “Measuring human capabilities: An agenda for basic research on the assessment of individual andgroup performance for military accession” (National Research Council, 2015) referenced the CHC-related research of both John Horn and Jack Carroll. Research on the selection and training of Canadian military pilots has also used the CHC model to categorize cognitive and aptitude measures (Forgues, 2014; Herniman, 2013.  The US Federal Aviation Administration (FAA) has conducted research on the aptitude requirements needed for air traffic control specialists and utilized the CHC taxonomy in the analysis of the various aptitude measures (Broach, 2013).

Recognition of the CHC taxonomy has also played a role in stimulating new debates in the field of industrial-organizational (I-O) psychology.  A number of IO psychologists have argued for IO’s need to reconsider its relatively long-standing neglect of the construct of intelligence. As summarized by Murphy (2017):

“for several decades, the question of whether measures of specific cognitive ability contributed anything meaningful to the prediction of performance on the job or performance in training once measures of general mental ability were taken into account appeared to be settled, and a consensus developed that there was little value in using specific ability measures in contexts where more general measures were available. It now appears that this consensus was premature, and that measures of specific abilities can make important contributions even if general measures are taken into account” (p. 4).

In the target article of a special issue of Industrial and Organization Psychology (”Intelligence 2.0: Reestablishing a research program on g in I–O psychology”), Sherbaum, Goldsteing, Yusko, Ryan and Hanges (2012) challenged I-O researchers, in part because of the progress made in building validated psychometric (CHC) and other models of intelligence, to re-engage in the study of intelligence since contemporary general intelligence and specific cognitive abilities research has shown promise over the older “all there is is g” I-O consensus. Schneider and Newman (2015) echoed the same messages articulated by Murphy (2017) and Sherbaum et al. (2012) in the human resource management literature.

The CHC model is now involved in life and death decisions. In Atkins v Virginia (2002), the United States Supreme Court ruled it unconstitutional to execute individuals with intellectual disabilities. Since such Atkins cases typically rely on the definitions and guidelines of American Association of Intellectual and Development Disabilities (AAIDD, 2010) and the American Psychiatric Associations Diagnostic and Statistical Manual (DSM-5, 2013), IQ scores have become central to life or death Atkins decisions. 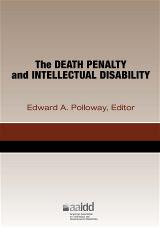 Recognizing the variability in forensic intelligence testing practice and resulting diagnostic chaos, a number of forensic psychologists have argued for the use of the CHC taxonomy to better organize forensic research and to provide stronger validity for the interpretation of intelligence test results in Atkins cases and other criminal procedures (Habets, Jeandarme, Uzieblo, Oei & Bogaert; Uzieblo, Johan Vanderfaeillie, Gina Rossi &; Magez, 2012). Although the latest 2010 AAIDD manual focused primarily on IQ as a deficit in general intelligence, and did not recognize the CHC model, AAIDD has subsequently published a death penalty specific guidebook (Polloway, 2015) that, in the chapters on intellectual functioning (McGrew, 2015) and intelligence testing (Watson, 2015), places the CHC model front-and-center as the cognitive taxonomy for understanding intelligence test scores in Atkins cases. I believe this 2015 AAIDD publication sets the stage for AAIDD’s formal recognition of the importance of understanding multiple cognitive abilities (viz., CHC theory), and reducing the exclusive focus on the global IQ score in the next revision of the official AAIDD classification manual.


Other uses of the CHC taxonomy have been reported in such diverse contexts as the study of international Paralympic athletics, computer science education and the internet, and the search of extraterrestrial life. Biesen, Mactavish, Kerrremans and Vanlandewijck (2016) investigated the relation between nine CHC-classified cognitive measures and tactile proficiency in well-trained table tennis players with intellectual disabilities (members of the International Federation for Para-Athletes with Intellectual Disabilities; INAS). Tsianos, Germanakos, Belk, Lekkas, Samaras and Mourlas (2013) used the CHC taxonomy to organize the individual differences user profile layer, the adaptation mapping layer, and the web content layer in an Ontological Adaptation Mechanism (OAM) for designing personalized web environments. Also in the field of computer science, Roman-Gonzalez et al. (2016) used the CHC model to investigate the cognitive abilities (Gf, Gv, Gwm) measured by the Computational Thinking Test (CTT), a measurement of computer science knowledge in educational settings. Finally, CHC theories role in the search for ET does not reference any real practical application of the CHC taxonomy in astrobiology. It is mentioned here simply to indicate that the CHC theory received honorable mention (viz., citation of McGrew, 2009 CHC article in Intelligence) in the article “Astrobiology in Culture: The Search for Extraterrestrial Life as ‘Science’’’(Billings, 2012) when comparing the problem of defining extraterrestrial life with that of the problem of defining intelligence in psychology.

Finally, the CHC model of “intelligence” is informing another important “intelligence”—national security intelligence. The US Office of the National Director of Intelligence (ODNI) sponsors a number of research programs focused on increasing the critical problem solving and analytic thinking of US intelligence analysts. One is the Strengthening Human Adaptive Reasoning and Problem-Solving (SHARP) Program focused on the advancement of the science for optimizing human adaptive reasoning and problem-solving. “The goal of the program is to test and validate interventions that have the potential to significantly improve these capabilities, leading to improvements in performance for high-performing adults in information-rich environments.” The SHARP program has incorporated CHC organized research and models in the conceptualization, implementation, and evaluation of this important research program (Hartman, Sprenger, Weeks, Kyllonen, Bertling, McGrew & Sarah Kriz, 2017).[2]