"According to a first perspective, higher initial levels of knowledge (or reasoning) could facilitate the acquisition of new knowledge (or reason-ing abilities), which has also been labeled Matthew effect1 (Fig. 1, Panel A). Even though the term was originally coined to describe the phenom-enon that eminent researchers often get more credit for the same scien-tific contribution than their unknown competitors (Merton, 1968), it has been applied to various psychological phenomena (e.g., Shaywitz et al., 1995; Stanovich, 1986). In the context of intelligence research, the knowledge-is-power hypothesis (Hambrick, 2004; Hambrick & Engle, 2002) assumes that prior knowledge is the best predictor of fu-ture learning within a given domain of expertise, even stronger than reasoning (beside the fact that the empirical support for corresponding compensation effects is rather weak). As a consequence, students who are already knowledgeable should show the strongest knowledge gains and the achievement gap would widen. Research on expertise suggested several psychological mechanisms accounting for such “fan-spread” effects (Walberg & Tsai, 1983), that is, with a profound knowl-edge base new knowledge can be processed faster, integrated deeper and retrieved more accurately (e.g., Chase & Simon, 1973; Hambrick & Engle, 2002)."

Footnote re Mathew Effect origin: The name refers to the bible verse: “To all those who have, more will be given, and they will have an abundance; but from those who have nothing, even what they have will be taken away” (Matthew 13:12 and also 25:29, The New Oxford Annotated Bible, New Revised Standard Version)

"In the second perspective on how growth in intelligence is related to baseline levels, the gap between more and less capable individuals closes with time. Assuming that the change in both hypothetical sub-groups is still positive, less able test takers catch up (Fig. 1, Panel C). In the school context, the psychological mechanism behind such a com-pensation effect is at first glance somewhat obscure, especially if one takes into account that achievement differences tend to increase over time. This putative contradiction can be solved by assuming that school education especially promotes students with lower abilities during the school year, but that the achievement gap enlarges during vacations (Alexander, Entwisle & Olson, 2001; Cooper, Nye, Charlton, Lindsay & Greathouse, 1996). However, a compensation effect could also result from a lack of support for talented students. Snow (1989, p. 871) inci-sively pointed to the conflicting aims of education in school, that is, “maximize achievement outcome for all students while minimizing achievement variations among them”, which is often “resolved” by tailoring instructions to the needs of less able students." 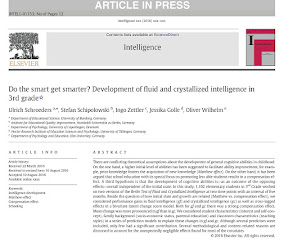