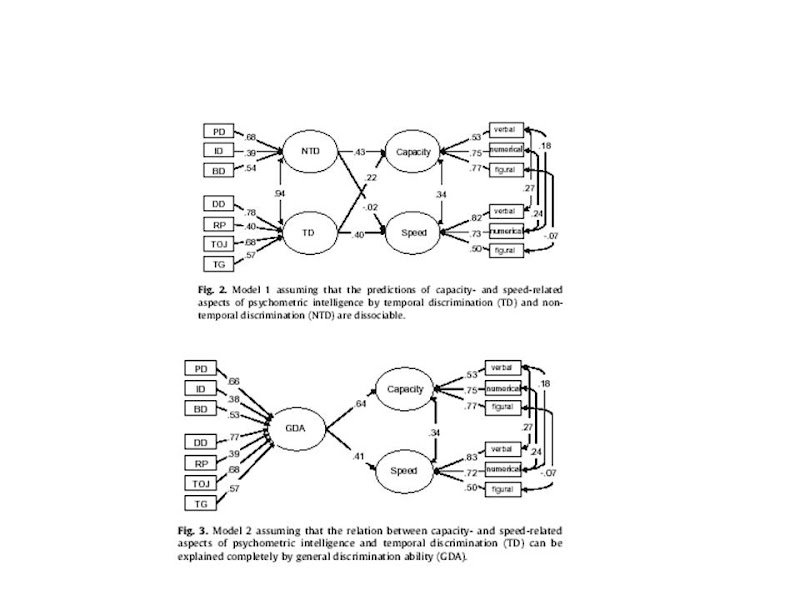 
[This is an OBG post (oldie but goodie post) that was first posted June 29, 2009 at IQs Corner sister blog - the Brain Clock blog]

I've previously blogged, with considerable excitement, about recent research that has suggested that the temporal resolution of one's internal "brain clock" may be more closely associated with intelligence scholars search for the neural underpinnings of general intelligence (g). Traditionally, and overwhelmingly, intelligence scholars have studied and focused on mental reaction time, largely based on the seminal work of Arthur Jensen. Then, along came recent research led primarily by mental timing scholar Rammsayer and colleagues...research that suggested that temporal g (vs. reaction time g) may be more important in attempts to identify the underlying mechanism of neural efficiency.. the focus of the search for the "holy grail" of general intelligence for decades.

The following just published journal article continues to add to the evidence that temporal processing, temporal g, and/or temporal resolution, may be critically important in understanding human intellectual performance. Below is the article reference, abstract, and my paraphrased comments from a reading of the article.

The neural efficiency hypothesis, based on Jensen's model of neuronal oscillations, has stood front and center as the defacto explanation of individual differences in processing speed and psychometric intelligence. This model suggests that individuals differ in the rate of rate of oscillation between refractory and excitatory states of neurons. The efficiency of oscillation rate, in turn, determines the speed/efficiency of transmission of neurally encoded information. The bottom line is that individuals with higher neural oscillate rates are believed to process information more efficiently, which leads to better intellectual performance.

In contrast, according to the articles authors, the more recent "temporal resolution power (TRP) hypothesis also refers to a hypothetical oscillatory process in the brain to account for the relationship between efficiency and speed of information processing as well as psychometric intelligence (Rammsayer & Brandler, 2002, 2007). According to this view, higher neural temporal resolution leads to faster information processing and to better coordination of mental operations resulting in better performance on intelligence tests. Rammsayer and Brandler (2002) proposed that psychophysical timing tasks, assessing temporal sensitivity and timing accuracy, are the most direct behavioral measures of TRP. The TRP hypothesis has been supported by subsequent studies which found substantial correlations between psychometric intelligence and timing performance (Helmbold, Troche, & Rammsayer, 2006, 2007; Rammsayer &  Brandler, 2007)." Most of these studies have been described previously at the IQ Brain Clock blog under the label temporal g.

An important issue for the TRP hypothesis to address is the fact that the most frequently used mental timing tasks also imply some form of simple sensory discrimination (together with the timing component). In order for the TRP hypothesis to have merit, the model must address (explain) the established relation between sensory discrimination and psychometric (tested) intelligence not only for the temporal domain but also for other non-temporal sensory dimensions. As summarized by the author, "associations with psychometric intelligence were shown for color (r = .08 to r = .32; Acton & Schroeder, 2001), pitch (r = .42 to r = .54; Raz, Willerman, & Yama, 1987), or texture and shape in the tactile modality (r = .08 to r = .29; Stankov, Seizova-Cajic´, & Roberts, 2001)."

The purpose of the current study was to disentangle the relations between temporal processing and sensory discrimination via the evaluation and testing of two different structural models. As described by the authors, "the first model expanded the investigation of Helmbold et al. (2006) to the level of latent variables by factorizing various non-temporal and temporal discrimination tasks. It is assumed that temporal and non-temporal discrimination abilities predict psychometric intelligence as two disocciable factors which, however, can be related to each other. The TRP hypothesis postulates that TRP affects both capacity- and speed-related aspects of psychometric intelligence (Helmbold & Rammsayer, 2006)."

The subjects were 100 male and 100 female volunteers (18 to 30 years of age; mean ± SD = 22.2 ± 3.3 years). The sample comprised 93 university students, 89 vocational school students and apprentices, while the remaining participants were working individuals of different professions. All participants reported normal hearing and normal or corrected-to-normal sight. The authors employed structural equation modeling (SEM) methods to evaluate and compare the two models.

Bottom line: This study continues to support the importance of temporal g, temporal processing, or the TRP hypothesis in explaining neural efficiency, which in turn is believed to play a major role in facilitating better (higher) intellectual performance. Understanding the intenral IQ Brain Clock, and interventions/treatments that may help "fine tune" the brain clock (increase its timing resolution), appears an important avenue to pursue both for theoretical and applied (cognitive enhancement interventions) research. To pat myself on the back, I've previously summarized the potential link between increased resolution of the brain clock and higher cognitive functioning in prior professional presentations (click here to visit a SlideShare PPT show)