I am pleased to see the Journal of Intelligence addressing the integration of non-cognitive variables (personality; self-beliefs; motivational constructs; often called the “no-mans land” between intelligence and personality— I believe this catchy phrase was first used by Stankov) with intellectual constructs to better understanding human performance. I have had a long-standing interest in such comprehensive models as reflected by my articulation of the Model of Academic Competence and Motivation (MACM) and repeated posting of “beyond IQ” information at my blogs.

Joel Schneider and I briefly touched in this topic in our soon to be published CHC intelligence theory update chapter. Below is the select text and some awesome figures crafted by Joel.

Our simplified conceptual structure of knowledge abilities is presented in Figure 3.10. At the center of overlapping knowledge domains is general knowledge—knowledge and skills considered important for any member of the population to know (e.g., literacy, numeracy, self-care, budgeting, civics, etiquette, and much more). The bulk of each knowledge domain is the province of specialists, but some portion is considered important for all members of society to know. Drawing inspiration from F. L. Schmidt (2011, 2014), we posit that interests and experience drive acquisition of domain-specific knowledge. 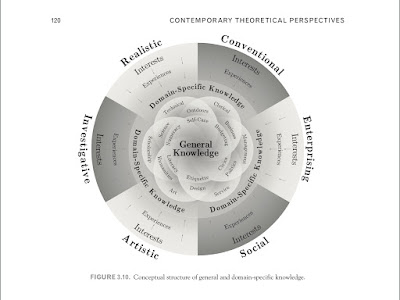 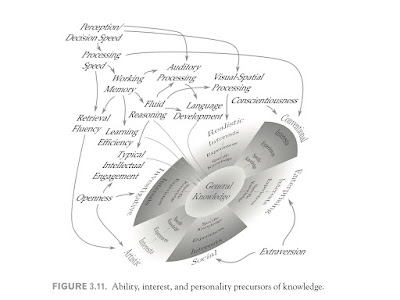 - Posted using BlogPress from my iPad
Posted by Kevin McGrew at 11:20 AM