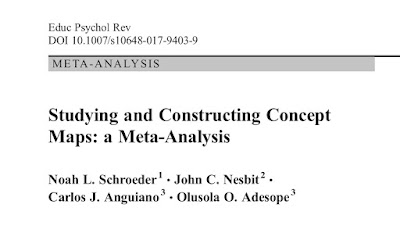 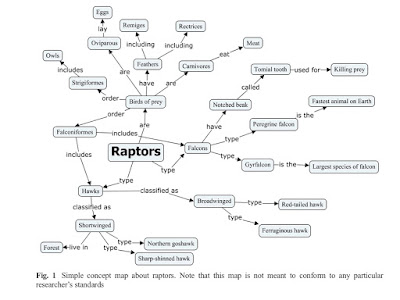 A concept map is a node-link diagram in which each node represents a concept and each link identifies the relationship between the two concepts it connects. We investigated how using concept maps influences learning by synthesizing the results of 142 independent effect sizes (n = 11,814). A random-effects model meta-analysis revealed that learning with concept and knowledge maps produced a moderate, statistically significant effect (g = 0.58, p < 0.001). A moderator analysis revealed that creating concept maps (g = 0.72, p < 0.001) was associated with greater benefit relative to respective comparison conditions than studying concept maps (g = 0.43, p < 0.001). Additional moderator analyses indicated learning with concept maps was superior to other instructional comparison conditions, and was effective across science, technology, engineering, and math (STEM) and non-STEM knowledge domains. Further moderator analyses, as well as implications for theory and practice, are provided.

The following text is a direct quote from the conclusion section.

Nesbit and Adesope (2013) proposed seven cognitively oriented hypotheses that could explain the advantages of using concept maps for teaching and learning in comparison with reading text, listening to lectures, participating in discussions, writing summaries, and other instructional activities. First, using concept maps may enable dual coding of information in verbal and visual components of longer-term memory and thereby support more effective retrieval. Second, in comparison with text, they may allow cognitive load to be distributed across the visual and verbal channels of working memory, thus avoiding an overload of verbal working memory. Third, concept maps tend to consolidate multiple references to a concept at a single point in space, while in text, audio or other sequential formats the references would be spread over the sequence. Consolidating all relationships to a concept around a single point, a kind of spatial contiguity, may promote a more semantically integrated understanding of the concept. Fourth, in some types of concept maps, particularly those specified by Novak and Cañas (2008), superordinate and subordinate semantic relationships (e.g., mammal-squirrel) are signaled more strongly than they typically are in text. Fifth, the noun-verb-noun syntax used to express propositions in concept maps is much simpler and more accessible to poor readers and writers than the typical prose of expository text. Sixth, the decisions required to construct a concept map (e.g., determining which nodes should be placed close together) entail greater elaborative or germane processing than the decisions required to construct expository text. Finally, because concept maps take up more space than text, they may demand a greater degree of concision or summarization which in turn prompts greater elaborative processing.

- Posted using BlogPress from my iPad
Posted by Kevin McGrew at 11:28 AM