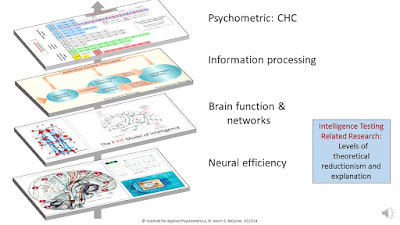 Research that falls under the breadth of the topic of human intelligence is extensive.

For decades I have attempted to keep abreast with intelligence-related research, particularly research that would help with the development, analysis, and interpretation of applied intelligence tests.   I frequently struggled with integrating research that focused on brain-behavior relations or networks, neural efficiency, etc.  I then rediscovered a simple three-level categorization of intelligence research by Earl Hunt.  I modified it into a four-level model, and the model is represented in the figure above.

In this "intelligent" testing series, primary emphasis will be on harnessing information from the top "psychometric level" of research to aid in test interpretation.  However, given the increased impact of cognitive neuropsychological research on test development, often one must turn to level 2 (information processing) to understand how to interpret specific tests.

This series will draw primarily from the first two levels, although there may be times were I import knowledge from the two brain-related levels.

To better understand this framework, and put the forthcoming information in this series in proper perspective, I would urge you to view the "connecting the dots" video PPT that I previously posted at this blog.

Here it is.  The next post will start into the psychometric level information that serves as the primary foundation of "intelligent" intelligence testing.