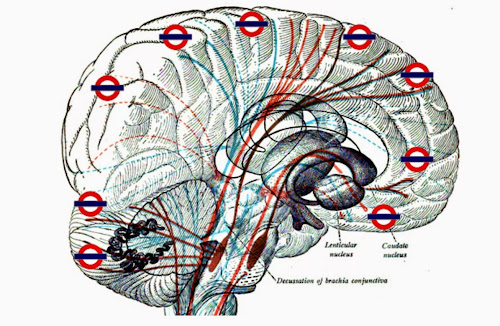 White matter, in contrast to the grey squiggly mass (the cerebrum) that most people associate with the human brain, was for many years the research step-child to the cerebrum. That is no more. White matter, which has been called the brain's subway, super information system, or interstate highway communication system, now has a glass slipper. Research during the past decade has implicated white matter as performing the critical task of connecting and synchronizing different brain regions or networks so they can perform a wide variety of complex human cognitive or motor behaviors. The white matter system is considered the communication backbone system for the flow of information in the brain. Of particular interest (to me) is the parietal-frontal network, which is implicated as central to abstract human intelligence, fluid intelligence (Gf), working memory and attentional control (see prior posts re: the P-FIT model).

In a MindHub white paper I hypothesized that increasing white matter tract integrity may be a key mechanism behind the efficacy of the Interactive Metronome neuro-timing intervention (see figure below). I have gone as far as suggesting that the efficacy of many brain training/fitness programs may stem from a common domain-general effect--improving communication between and within various brain network(s) via more efficient white matter tract speed and communication. [Click on image to enlarge] 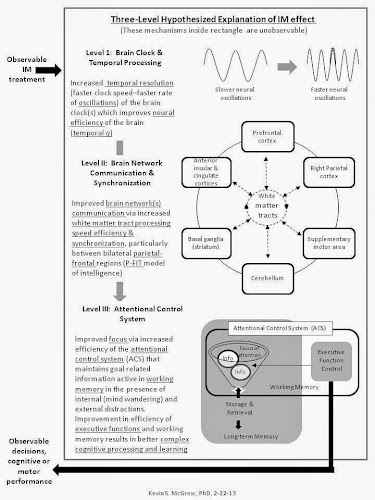 Posted with Blogsy
Posted by Kevin McGrew at 9:02 AM