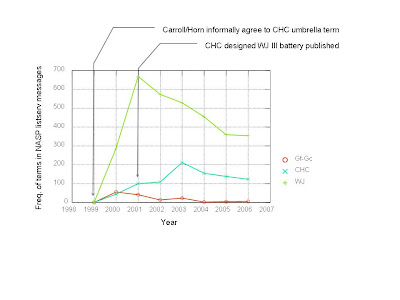 [Double click on image to enlarge]
In April 2005, upon returning from the annual NASP (National Association of School Psychologists) convention, I concluded (in a blog post) that sometime during the past 5 years the CHC intelligence theory "tipping point" had occurred, and the CHC intelligence test bandwagon had gathered full steam. Before reading further, I would recommend reading that original post for background information and important links (esp. the link to the historical information I've written about the evolution of CHC theory).

To satisfy my curiosity I decided to gather some informal data...namely, the tracking of select terms in the body of messages on the NASP listserv. I wanted to see if there was any change in the usage of CHC-related terms over time. So...what did I do?

I went to the NASP listserv and used a Yahoo Groups feature that allowed me to search the body of all archived messages for key terms. I did this for different years. The terms I searched where Gf-Gc (what CHC theory originally was referred to prior to the publication of the WJ III; see prior original post for important link to historical background information), CHC, and WJ (Woodcock-Johnson). At the top of this post is a graph of the results.

From the figure I've concluded that the CHC tipping point, at least within the NASP community, occurred sometime between 2001 and 2003. The publication of the WJ III in 2001 is important as it was the first intelligence battery organized as per CHC theory (note - the1989 WJ-R was organized as per Cattell-Horn Gf-Gc theory). [Read the previously referenced historical background information regarding the role of the WJ-R and WJ III in the infusion of Gf-Gc and CHC theory into applied intellectual assessment - click on my original post to find this info]. As one can see, their was a huge amount of discussion of the WJ III went it hit the streets....volume that has continued for a number of years.

What I find particularly interesting is the replacement of references to Gf-Gc by CHC starting in the same year....2001. Notice the increase in CHC references from 2001 thru 2003 with a concurrent decrease in the use of the terms Gf-Gc. I would conclude, largely based on my personal knowledge of the history of the origin of the term "CHC" [again, read the historical information I've provided], that the publication of the WJ III was the primary event(as well as the increasing interest in CHC-organized cross-battery assessments) that resulted in the infusion of CHC theory into school psychology, as evidenced by a change in the language used by school psychologists on their general purpose listserv.

Since 2003 there has been a general decrease in the use of the CHC in NASP listserv messages. Does this mean that the interest in the theory has peaked? I think not. I've data to support this conclusion.

The NASP listserv is a general purpose topic listserv. Intellectual assessment/theory topics are only a small part of the collective message threads. I would advance the hypothesis that CHC theory continues to increase in the communications of psychologists. Upon what do I base this observation? I base this conclusion on the membership figures for the special-purpose CHC listserv that I started.

If you click here you will see a graph of the cumulative membership of the CHC list, a list that I started in order to give folks interested in CHC theory/assessment issues a place to talk about them in-depth.....and to also save the NASP listserv from such focused discussions (as all members may not be interested). As you can see from the membership numbers of the CHC list, membership is growing at a nearly constant linear rate from 2003 to 2006 [note - current membership is at 956 and should reach 1000 relatively soon].

I conclude that the infusion of CHC theory into school psychology, which reached a tipping point sometime between 2001 and 2003, continues at a very steady rate, as evidenced by the increasing membership of the CHC list, as well as other objective indicators (namely, revision of other intelligence batteries to provide CHC interpretive frameworks....SB5, KABC-II, DAS-II...as well as continued interest in CHC-organized cross-battery assesment).